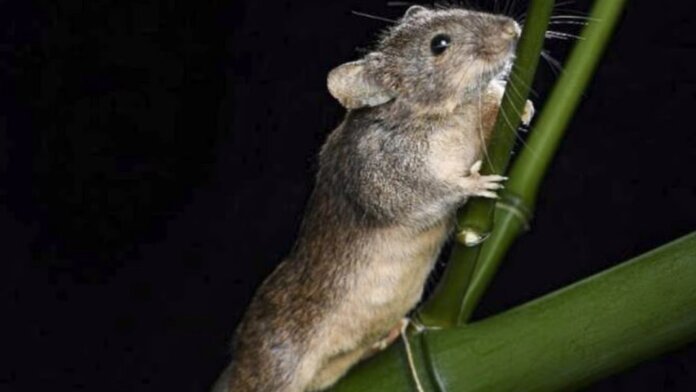 With its inquisitive eyes, furry snout, and lush pelt, the mouse—nicknamed Xiao Zhu, or Little Bamboo—nimbly perched on a bamboo stalk, striking a pretty pose for the camera. But this mouse doesn’t exist in nature.

Made in a lab in Beijing, Xiao Zhu pushes the boundary of what’s possible for genetic engineering and synthetic biology. Rather than harboring the usual 20 pairs of chromosomes, the mouse and its sibling cohorts only have 19 pairs. Two chunks of different chromosomes were artificially fused together in a daring experiment that asked: rather than tweaking individual DNA letters or multiple genes, can we retune an existing genomic playbook wholesale, shuffling massive blocks of genetic material around at the same time?

It’s a moonshot idea. If the genome is a book, gene editing is like copy editing—changing a typo here and there, or fixing multiple grammatical errors with carefully-placed tweaks.

Chromosome-level engineering is a completely different beast: it’s like rearranging multiple paragraphs or shifting complete sections of an article and simultaneously hoping the changes add capabilities that can be passed onto the next generation.

Reprogramming life isn’t easy. Xiao Zhu’s DNA makeup is built from genetic letters already optimized by eons of evolutionary pressure. It’s no surprise that tinkering with an established genomic book often results in life that’s not viable. So far, only yeast have survived the rejiggering of their chromosomes.

The new study, published in Science, made the technology possible for mice. The team artificially fused together chunks from mice chromosomes. One fused pair made from chromosomes four and five was able to support embryos that developed into healthy—if somewhat strangely behaved—mice. Remarkably, even with this tectonic shift to their normal genetics, the mice could reproduce and pass on their engineered genetic quirks to a second generation of offspring.

“For the first time in the world, we have achieved complete chromosomal rearrangement in mammals, making a new breakthrough in synthetic biology,” said study author Dr. Wei Li at the Chinese Academy of Sciences.

In a way, the technique mimics evolution at break-neck speed. Based on existing data on mutation rates, the type of genetic swap introduced here would generally take millions of years to achieve naturally.

The study isn’t perfect. Some genes in the engineered mice were abnormally tuned down, resembling a pattern usually seen in schizophrenia and autism. And although the mice grew to adulthood and could breed healthy pups, the birth rate was far lower than that of their non-engineered peers.

Even so, the study is a tour de force, said evolutionary biologist Dr. Harmit Malik at the Fred Hutchinson Cancer Center in Seattle, who was not involved in the study. We now have this “beautiful toolkit” to tackle outstanding questions regarding genomic changes on a larger scale, potentially shedding light on chromosomal diseases.

Wait, What Are Chromosomes Again?

Let’s back up. Our genes are encoded in DNA double-helix chains, which resemble ribbons that float inside the cell. It’s not space-efficient. Nature’s solution is to wrap each chain around a protein spool, like slices of prosciutto twirled over a mozzarella stick. Additional twists pack these structures into tiny pucks—picture beads on a string—which then wrap into chromosomes. Under the microscope, they mostly look like the letter X.

Each species carries a set number of chromosomes. Human cells—except for sperm and eggs—all harbor 46 individual chromosomes arranged in 23 pairs, inherited from each parent. Lab mice, in contrast, only have 20 pairs. The complete set of chromosomes is called the karyotype, derived from the Greek word “kernel” or “seed.”

Mixing and matching chromosomes has long been a part of evolution. According to current estimations, a rodent generally accumulates roughly 3.5 chromosome rearrangements every million years; some segments get deleted, others duplicated or shuffled. For primates, the rate of change is about half that. Shifting around chunks of chromosomes may seem drastic for any animal, but when viable, the changes pave the way for evolving entirely different species. Our chromosome two, for example, was fused from two separate ones, yet the tweak isn’t present in the gorilla, our close evolutionary cousin.

The new study aimed to do one better than evolution: using genetic engineering, it asked, can we condense millions of years of evolution down to just a few months? It’s not just for scientific curiosity: chromosome diseases underlie some of our toughest medical conundrums, such as childhood leukemia. Scientists have previously triggered chromosome rearrangement using radiation, but the results weren’t easily controllable, making it impossible for the animals to birth new offspring. Here, synthetic biologists took a more targeted approach.

The first step is figuring out why chromosomes are resistant to large changes in their organization. As it turns out, a major hiccup to swapping—or fusing—chromosome chunks is a biological quirk called imprinting.

We receive chromosomes from both parents, with each set containing similar genes. However, only one set is turned on. How the process of imprinting works remains mysterious, but we know that it kneecaps embryonic cells’ ability to develop into multiple types of mature cells and limits their potential for genetic engineering.

Back in 2018, the same team found that deleting three genes can override the imprinting biochemical program in stem cells. Here, they used these “unlocked” stem cells to genetically patch together two chromosome pairs.

They first set their eyes on chromosomes one and two, the largest two in a mouse genome. Using CRISPR, the team chopped apart the chromosomes, allowing them to swap genetic chunks and re-form into stable genetic constructs. Cells that harbored the chromosome change were then injected into oocytes—egg cells. The resulting embryos were transplanted into surrogate female mice to further mature.

The swap was deadly. The artificial chromosome, with chromosome two followed by chromosome one, or 2+1, killed the developing fetus just 12 days after conception. The same two chromosomes fused in the opposite direction, 1+2, had better luck, yielding living pups with only 19 chromosome pairs. The baby mice were abnormally large for their size, and in several tests seemed more anxious than their normal peers.

A second chromosome fusion experiment fared better. Chromosomes 4 and 5 are much smaller in size, and the resulting embryo—dubbed 4+5—developed into healthy mouse pups. Although also lacking a chromosome pair, they seemed surprisingly normal: they weren’t as anxious, had average body weights, and when matured, gave birth to pups that also lacked a pair of chromosomes.

In other words, the team engineered a new karyotype in a mammalian species that could be passed on through generations.

To Malik, it’s all about scale. By overcoming the imprinting problem, “the world is their oyster as far as genetic engineering,” he said to The Scientist.

The team’s next goal is to use the technology to solve difficult chromosomal diseases rather than designing mutant species. Artificial evolution is hardly around the corner. But the study does showcase the surprising adaptability of mammalian genomes.

“One of the goals in synthetic biology is to generate complex multicellular life with designed DNA sequences,” the authors wrote. “Being able to manipulate DNA at large scales, including at the chromosome level, is an important step toward this goal.”