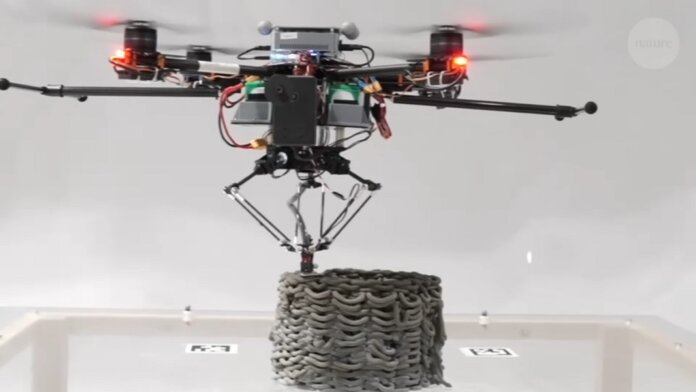 I admit: if I see a beehive, I back away—fresh honey be damned. But part of me is also fascinated. Beehives are a remarkable feat of engineering. Made of materials from tree buds to chewed-up wax, swarms of bees deposit these raw ingredients into densely-packed honeycombs—each a geometric masterpiece—while flying in the air.

In stark contrast, human construction is far more land-bound. Bulldozers, compactors, and concrete mixers are highly effective, and they’ve been the backbone for establishing our infrastructure. But they’re also bulky, unwieldy, and require roads or other means of transportation. This kneecaps their ability to rapidly respond to natural disasters on islands and other remote locations that need quick help, especially after emergencies.

Unfortunately, we’ve had increasingly frequent climate examples. Drastic road erosions due to raging wildfires. Highways and bridges that crumble after being soaked in water from floods and hurricanes. This month, even as parts of Puerto Rico are still recovering from Hurricane Maria, many homes were once again flooded by Hurricane Fiona.

Is there a way to rapidly build shelters—or even houses—in difficult-to-access areas and better tackle these emergencies?

Last week, a team from Imperial College London took inspiration from bees and engineered a cohort of autonomous drones that 3D prints any designed structure. Similar to a bee hive, each drone acts independently, but they work as a team. The entire fleet is dubbed aerial additive manufacturing (Aerial-AM).

Acting like bees, the drones each have different roles. Some are the builders—dubbed BuilDrones—which deposit material as they fly. Others are ScanDrones, which act as managers that continuously scan the current build and provide feedback.

In several tests, the fleet printed multiple structures—using materials from foam to a cement-like goo—to millimeter accuracy with minimal human supervision. It’s still a far cry from a finessed 3D printed house, and more like a kid’s first attempt at pottery. Some structures resemble a rudimentary tower; others, a woven wicker basket.

We may be a ways from 3D printing bridges on the fly to evacuate people from an impending tropical storm. But the study shows a step towards that possibility. “Aerial-AM allows manufacturing in-flight and offers future possibilities for building in unbounded, at-height or hard-to-access locations,” the authors said.

Using robots to help with construction is nothing new. But thanks to increasingly sophisticated algorithms, they’ve become handy tools in the infrastructure business. One idea is to help with tasks like finishing drywall, dramatically reducing the time required. Another is to battle the housing shortage plaguing us all. In the past few years, 3D printed houses skyrocketed from fantasy to reality—from gorgeous tiny homes to affordable multi-room homes.

But what’s been lacking is the technology’s access to rural areas. Imagine pothole-filled dirt roads, bumpy on a sunny day and ankle-deep muddy nightmare after a torrent of rain. Picture wheels stuck in inches of mud, with no way to dig yourself out other than a shovel. Now think about transporting massive 3D printers or other construction robots to that emergency site.

Not ideal, eh? Rather than battling earth and gravity, why not fly?

Inspired by bees, the team, led by Dr. Mirko Kovac at Imperial College London, took to the sky. Their idea weaves together 3D printing with self-organizing drones, which seamlessly build a “beehive” of a pre-programmed blueprint.

The main idea relies on our ability to shape certain materials at will—like squeezing Play-Doh or stacking Legos. This process lets us flexibly mold materials into different geometric designs and is dubbed “free-from continuous additive manufacturing” (a mouthful, I know, so just “AM”).

It starts with an appreciation of free-flying builders in the wild. Take wasps. While not the friendliest of creatures (speaking from multiple painful stings), they’re rather remarkable in that they’re highly efficient in navigating their paths for dispensing building material. It’s like a flying carpenter building a cabinet seamlessly with a cohort—an incredible feat that scientists are still trying to understand.

Here, the team asked if it’s possible to achieve the same engineering prowess with a swarm of smaller robots. It’s a tough problem—most previous approaches are only at an “early exploratory stage,” the team said, with “limited operational height.”

Their solution was a software, Aerial-AM framework that taps into previous engineering ideas and natural precedents so each drone could work in parallel as a swarm. Drones also had to act as faithful 3D printers while in flight, broadcasting their location and activity to their neighbors (so there’d be no extra “icing” on a structure). Each was then equipped to navigate the airspace—without bumping into each other—with limited human interference. Finally, depending on the given structure, they carefully squeezed out a lightweight, foam-like material or a printable cement mix, based on instructions.

The brain behind the operation is Aerial-AM, which combines physics with AI to program two different types of aerial robot platforms. One is the BuilDrone, which autonomously deposits any material based on its programming. The other is ScanDrone, the quality control bot that scans ongoing construction with computer vision. Like a manager on a construction site, this gives feedback to the construction drone with every deposited layer.

The process isn’t completely run by robots. Human supervisors can tap into both the manufacturing strategy phase—that is, the best way to print a material—and the manufacturing phase. Before printing, the team ran a simulation to generate a “virtual print” using three or more drones.

As a proof of concept, the team challenged their 3D printing platform, Aerial-AM, with several shapes and materials. One was a cylinder over 6.5 feet tall, printed with over 72 layers of material made from polyurethane foam. Another type of BuilDrone was optimized for a cement-like mix, which built a thin cylinder nearly four feet tall.

For a final test, six drones helped construct a parabolic surface (picture a thimble). Based on those data, the study then ran several simulations, asking how the scale of the structure and the number of robots changed the eventual build.

Overall, the construction swarm came off as highly adaptable, not just to scale and structure but also to robot population size. Even as the number of potential robots increased, they optimized their paths to avoid collision, like cooks at a bustling restaurant during the dinner rush.

The drone squad isn’t yet ready for prime time. For now, they’ve only been shown to construct small-scale structures. But the team is hopeful. The Aerial-AM framework can print different types of structures in a multi-robot dance without congestion. It demonstrates “adaptation and individual robot redundancy,” the team said.

Although just the first steps, it’s work that cements the feasibility of drones as aerial construction workers—those that could one day save lives by flying into dangerous territories. “We believe our fleet of drones could help reduce the costs and risks of construction in the future, compared to traditional manual methods,” said Kovac.