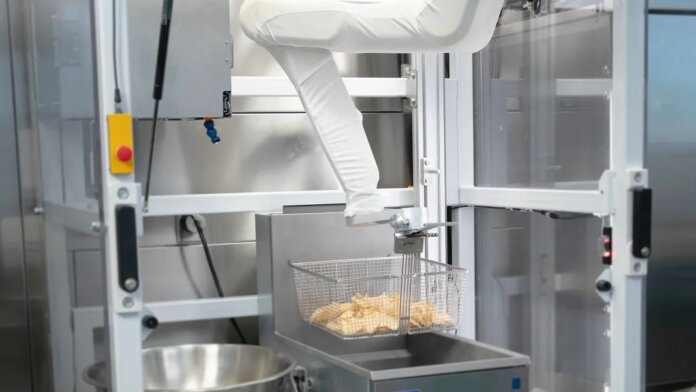 Restaurants have been struggling with labor shortages since the worst days of the pandemic, and the situation doesn’t seem to be getting any better. After employees quit in droves and millions of restaurants shut down and laid off their entire staff, people seem to have found other ways to earn a living. The result for restaurant-goers? Long waits, slow service, and disappointing meals.

While there may not be a ton that robots can do to help at traditional sit-down restaurants, they’re quickly moving in to fast food and fast-casual restaurants. Miso Robotics’ Flippy, initially debuted in 2017 to flip burgers at a California fast food chain, got hired at 100 White Castles earlier this year (with expanded capabilities!). It turns out Flippy has a cousin, and that cousin is rolling up its sleeves to go to work at Chipotle. Its name, while maybe not terribly original, is pretty spot-on for its task (and for rhyming with the name of its predecessor): Chippy.

If you haven’t guessed by now, Chippy the robot makes chips. Tortilla chips, to be exact. The process involves the following steps: cut up corn tortillas into triangles, fry the tortilla pieces in hot oil for 50 seconds, toss the chips in a mixing bowl with lime juice and salt, finish with more lime and salt, then separate the chips into portions.

If you’ve tried Chipotle’s chips, you know that not every chip is created quite equal, and that’s part of the appeal; it can be delightful to pop a chip into your mouth and find it’s a little saltier than the rest or has an extra kick of limey tartness. The restaurant requested that Chippy be able to replicate this lack of perfect uniformity, and Miso Robotics complied.

“To ensure we didn’t lose the humanity behind our culinary experience, we trained Chippy extensively to ensure the output mirrored our current product, delivering some subtle variations in flavor that our guests expect,” said Nevielle Panthaky, Chipotle’s Vice President of Culinary.

Chippy uses much of the same technology as its cousin Flippy 2, which was designed to independently do the work of an entire fry station (that includes identifying foods, picking them up, cooking them in fry baskets, then moving them to a hot-holding area). Besides having the same arm as Flippy and a similar frame, Chippy also uses cameras, sensors, motors, and computer vision to cook and season its chips to perfection.

Miso’s robots are designed to be installed under a standard kitchen hood or on the floor, making them plug-and-play for many fast food restaurants. However, the robotics company will work with Chipotle to make a smaller custom version of Chippy if it’s needed for some locations, as the burrito chain’s restaurants often have a different configuration than many burger-and-fry spots.

After several months of testing at the chain’s Cultivate innovation center in Irvine, California, Chippy will makes its restaurant debut at a Chipotle in Fountain Valley, California next month. The company will take feedback about the chips from customers, and feedback about working with the bot from employees, making any necessary tweaks before proceeding with a nationwide rollout.

Integrating the robot into Chipotle’s operations will not, unfortunately, knock any dollars or cents off the price of a bag of its chips—but it may mean you’ll get them into your hands a little bit faster.