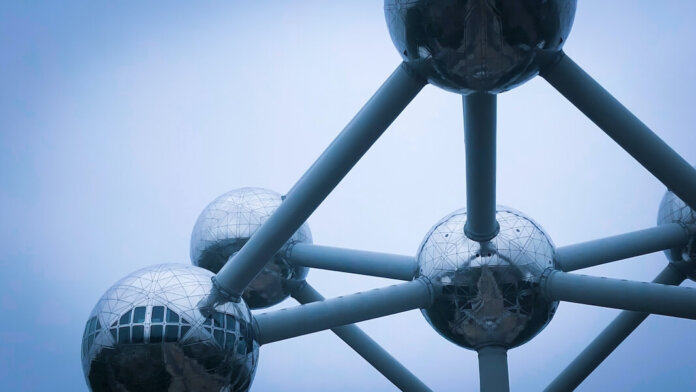 All life, as far as we know, assembles itself molecule by molecule. The blueprint for our bodies is encoded on ribbons of DNA and RNA. Cellular factories called ribosomes make these blueprints physical by linking amino acids into long strands called proteins. And these proteins, of which there are hundreds of millions, form an array of spectacular natural technologies: Eyes, muscles, bones, and brains.

The entire living world is built by these amazing molecular machines.

As scientists learn more about life’s machinery, they’re beginning to take the controls. Genetic engineers are tweaking the code with gene editing tools to treat illness. Synthetic biologists are coaxing genetically modified bacteria into producing substances like biofuels or converting society’s waste into valuable chemicals. Still more researchers are aiming to use DNA for digital storage and even robotics.

But there are limits to what living systems can make: They deal in carbon-based chemistry. Might we build new things by mirroring life’s machinery in inorganic ingredients? David Leigh, a University of Manchester organic chemist, thinks so. “As synthetic scientists, we’ve got the whole of the periodic table of elements that we can use,” he told Wired. “It’s breaking free of ways that biology is restricted.”

His team’s latest work, published in an article in Nature, describes a crucial step toward the ultimate goal: working molecular computers. Though there’s yet a very long way to go, Leigh’s vision fully realized would bring about a new way to build and compute. Molecular computers could store data and, like ribosomes, assemble physical products from coded blueprints. Instead of stringing amino acids into proteins, they might produce finely tuned materials with new properties that would be impossible to make any other way.

In 1936, Turing sketched out a thought experiment for what would become known as a Turing machine. In it, he imagined a tape with symbols punched into it being fed through a machine that could read the symbols and translate them into some kind of action. The Turing machine was the theoretical basis for modern computation, in which coded algorithms instruct machines to light pixels, load websites, or generate prose.

Turing’s machine should sound familiar for another reason. It’s similar to the way ribosomes read genetic code on ribbons of RNA to construct proteins.

Cellular factories are a kind of natural Turing machine. What Leigh’s team is after would work the same way but go beyond biochemistry. These microscopic Turing machines, or molecular computers, would allow engineers to write code for some physical output onto a synthetic molecular ribbon. Another molecule would travel along the ribbon, read (and one day write) the code, and output some specified action, like catalyzing a chemical reaction.

Now, Leigh’s team says they’ve built the first components of a molecular computer: A coded molecular ribbon and a mobile molecular reader of the code.

Researchers have been dreaming about molecular computers for decades. According to Jean-François Lutz of the National Center for Scientific Research in France, Leigh’s latest work is a notable step forward. “This is the first proof of principle, showing that you can effectively do it,” he told Wired. “It has been conceptualized, but never really achieved.” Here’s how it works.

Leigh’s molecular machines have a few key parts: a segmented molecular ribbon with carefully designed docking sites, a molecular ring that binds to and travels along the ribbon, and a solution in which many copies of the system are afloat. The team fuels the system with pulses of acid, changing the solution’s pH and modifying the ribbon’s structure.

With the first pulse, free molecular rings—in this case, a crown ether, or a ring of ether groups—thread themselves onto the ribbons, docking at the first of several binding sites. Each binding site’s chemical makeup induces a stereochemical change in the crown ether. That is, the binding site modifies the crown ether’s orientation in space without changing its composition.

Additional pulses of acid move the crown ether along sequential binding sites, and each new site causes it to contort itself into a different encoded configuration.

These stereochemical changes are the key. The team assigned each configuration a value. Instead of the 1s and 0s in binary code, they chose -1s, 0s, and +1s for two stereochemical twists (each the mirror of the other) and a neutral position. So, as the crown ether traverses the molecular ribbon, its chemical changes read out the code.

All this is invisible to the eye—so, how’d they know it worked? Each crown ether configuration twists light a little differently. By bathing the solution in light, they could watch the changes as they took place. The team found the twisting light matched the crown ether’s journey along the ribbon, broadcasting the message exactly as encoded.

The recent work is a fascinating proof of concept, but it’s still just that. The system is slow—taking several hours to move from site to site—only reads in one direction, and can’t yet write information. It doesn’t yet signal the impending arrival of molecular computers. “Dreaming in chemistry is always quite easy—making it happen is different,” Lutz said.

Still, it’s a step in the right direction, and next steps are in the works. Leigh said his team plans to get the system to write data. He also thinks greater speed is possible—though perhaps less important for some applications—and that they might increase information density by going from a three-digit system to five or even seven digits.

As scientists build on work like Leigh’s, they may open up a parallel universe of synthetic molecular machines just adjacent to the organic world.