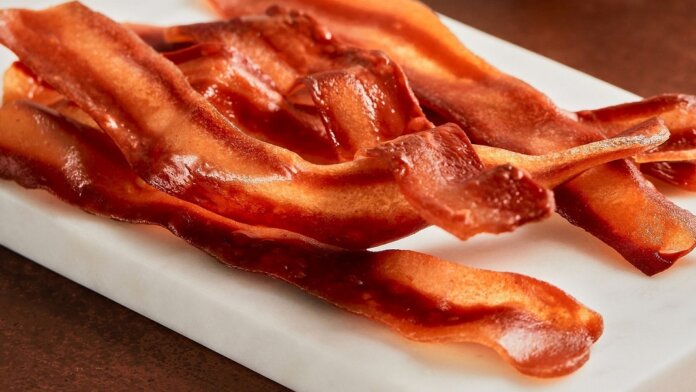 More people are opting to go vegetarian or vegan as factory farming’s impact on the planet becomes more apparent. But one carnivorous delight they may not have to give up is bacon, especially if they’re willing to be a bit flexible. A Dutch startup has been working on cultured bacon for a few years now, and New York-based MyForest Foods is producing a bacon substitute made from mushroom roots. They’ll soon have a competitor that will tempt consumers’ palates with yet another variety, this one made from a most unexpected source: seaweed (though to be fair, mushroom root is a pretty unexpected source for imitation bacon too).

Seaweed is good for you; it contains iodine as well as critical nutrients and antioxidants. But it doesn’t have the greatest taste (though this is admittedly a matter of personal preference; plenty of people love to snack on roasted sheets of the stuff). Umaro Foods, based in Berkeley, California, think they’ve found the perfect combination of ingredients to make seaweed taste—and feel—like bacon.

They start with red seaweed protein, which they say accounts for the bulk of the final product’s meaty taste, color, and texture. They add chickpea protein, which contains fatty acids and amino acids. Coconut oil and sunflower oil provide the fat, and spices like paprika and sea salt boost the flavor. Red radish juice adds color to make it all look more like real bacon. The product has a little less protein than real bacon, and about the same amount of fat.

Getting to the current product required many tweaks and iterations; the hardest part, Umaro Foods CEO and cofounder Beth Zotter told Fast Company, was the texture; real bacon, when cooked right, is crispy yet fatty and chewy, and that’s not easy to imitate.

Umaro’s team worked with various gels that come from seaweed, realizing that some of them could hold large amounts of oil. “Fat encapsulation” from seaweed gel ended up being what got the imitation bacon’s taste and mouthfeel close to the real thing. “We were just playing around with these textures and realized that we got something really crispy with a fat delivery,” Zotter said. Her team partnered with the food innovation lab at Oregon State University to get to a final version of their recipe.

Umaro’s bacon is available in a handful of restaurants around the US, though not yet for sale in grocery stores. It’s most commonly served as part of vegan BLTs or breakfast burritos. The company is aiming to launch it product in stores next year—and has some cash that could help them do so.

Along with cofounder Amanda Stiles, this past August Zotter appeared on the hit ABC show Shark Tank, where entrepreneurs pitch their business ideas in hopes of getting funded. Feedback from the sharks was mixed; upon trying a single strip, Robert Herjavec initially spit it out, saying, “I love bacon, don’t love this. It doesn’t really taste like bacon.” But after trying a vegan BLT, his opinion was totally different; “It’s great in the sandwich, like really good.”

Mark Cuban must have liked it, because he ended up giving the company $1 million in exchange for a 7 percent equity stake. Bacon, the founders told the sharks, is just the beginning. They hope to use seaweed as a base for vegan pepperoni, salami, and other cured meats. They’re currently working on automating part of their production process. “Once that’s completed, we should be able to beat the price of pork bacon,” Zotter said.

In terms of her product’s price and on the topic of seaweed-based foods in general, she’s highly optimistic. “Seaweed is the most planet-friendly source of protein around, and our bacon is going to be the first of many products to get seaweed onto the plates of every American, and everyone in the world,” she said.