Future Wearable Devices Need Flexible Antennas, Like This One Made of Silver Nanowires

As computers increasingly go into 24-hour medical monitoring devices, clothing, contact lenses and jewelry, there’s a growing need for electronic parts that can bend and withstand rougher treatment than most desktop machines have to handle.

Antennas are particularly challenging to make flexible because they have to transmit at a fixed bandwidth. But North Carolina State engineers Yong Zhu and Jacob Adams recently managed to build such an antenna using silver nanowires set in a flexible polymer. 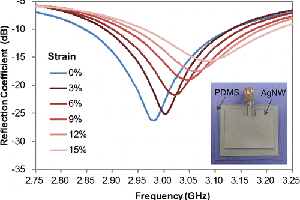 The antenna’s frequency changes as it is stretched, changing its dimensions, but remains within a defined bandwidth and the antenna continues to work.

“This means it will still communicate effectively with remote equipment while being stretched,” Adams said in a news release.

Continuous Internet connection means that the user doesn’t have to sync the device to a phone or computer to transmit the data into an app or to a doctor.

The device is small enough to be integrated directly into the sensors that give mobile computing its unique features.

Because the bandwidth at which the antenna communicates changes proportionately with the amount of strain put on it, it doubles as a wireless strain sensor. Other researchers have proposed using silver nanowires to detect strain, for instance as part of a medical device that maps strain and pressure on a knee joint.

Zhu’s lab’s first application will be to build a prototype remote health monitoring system with sensors that include the Wi-Fi antenna to transmit patient data to doctors around the clock.

Silver nanowire films, which are transparent, are also used to make large, flexible touch screens — one of those technological advances that pundits have long heralded as just around the corner. Perhaps with technology for flexible electronics and sensors catching up to display materials, the corner will finally, err, bend for displays. But it looks like the connectivity of devices with no screens or tiny rigid ones will improve first.