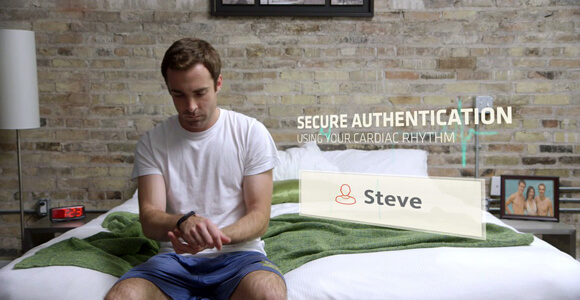 We’re tempted to file this one under “the more things change, the more they stay the same.” A wristband, called Nymi, that taps the user’s heartbeat as a biometric marker, will also double as a bitcoin wallet.

“The wallet is physically stored on the Nymi,” Yevgeniy Vahlis, the manufacturer’s chief cyrptographer, said in a release.

So instead of a wallet with twenties and ones in it, we’re now invited to wear a wristband with 0s and 1s in it. Irony aside, the wristband offers an innovative approach to keeping things protected and convenient as the number of smart connected devices grows.

When the user wears the watch and presses its face with a finger from the other hand, the double-sided contact closes a circuit which allows the device to get a rough ECG reading — it’s not a medically useful reading, but accurate enough to offer biometric identification. With the user’s identity verified, Nymi then logs him or her into all the hardware or software products that interface with it using Bluetooth. (NFC Ring is a similar idea with a different communication method.) The session stays active until the watch is removed, and the battery lasts as long as a week.

A futuristic video shows a user opening his car and hotel doors and paying for a cup of coffee with Nymi. 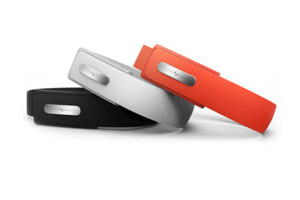 Nifty, but since Nymi doesn’t actually do much unless other hardware or software products accept its biometric login, its manufacturer, Toronto-based Bionym, has been aggressively encouraging third-party developers to build products for it.

Well, today the company stopped simply waiting and announced that it would build its own bitcoin wallet, or software application to manage the user’s bitcoin transactions and storage.

The same anonymity that makes bitcoin the favored currency of drug buyers and money launderers also makes it a high-risk piggy bank for average users. If one’s encryption code is hacked, the wallet can be stolen leaving no digital way to catch the thief.

“For Bitcoin to truly become more accessible, a robust security system needs to be established in order to protect it,” Biodyn said in the press release.

The company also claims that an ECG is a particularly secure form of biometric identification, because cardiac rhythm can’t be obtained like a finger print or spoofed like (a photo of) an iris. The wristband must also be paired with a smartphone to work, adding another layer of security. iPhones apparently won’t do, since Apple won’t open up its own biometric login system to third-party apps.

Of course, heart rhythms vary. But no worries — no seriously, no worrying!

“Since authentication only occurs when you first put [Nymi] on, we expect that you’ll have a pretty moderate heart rate. However, if you happen to be overly excited by the prospect of putting on your Nymi, you may have to wait a moment to calm down a bit. Once the Nymi is on, you’re free to exercise, stress and medicate to your heart’s content,” the company says in an FAQ.

Nymi will have a tough time competing with established wallet services like Coinbase, but by pairing virtual currency and biometrics, Biodyn makes a compelling case that digital technology could really become ubiquitous if security systems caught up with the use of Internet connectivity in day-to-day items from socks to thermostats, from pills and cars.