3D Printers and Drones — The Best Mash-up Since Peanut Butter and Chocolate? 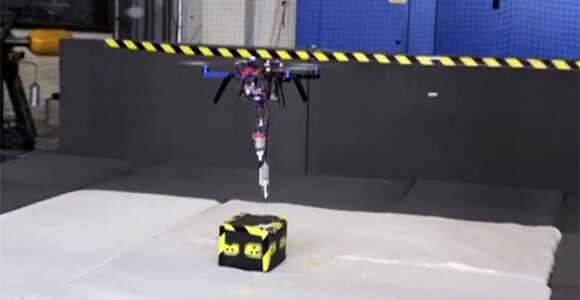 U.S. FAA head Michael Huerta recently told NPR that businesspeople are begging to be allowed to use drones for commercial purposes. It seems every Tom, Dick and Harry can envision a great way to make use of the unmanned aerial vehicles, which cost just a few dollars an hour to operate.

The only tech product with a longer list of clever uses is the 3D printer — though its price point largely limits its uses to industry and high-tech.

And because one of the formulas for innovation is combining two useful technologies to see if the whole might be greater than the sum of its parts, it was only a matter of time before someone mounted a 3D printer to a drone.

Mirko Kovac, an aerospace engineer at the Imperial College London, has done just that.

Mounted on a quad-copter drone, a 3D printer is loaded with quick-drying polymer foam. The idea is that the drone will be able to perform basic repairs on hard-to-reach buildings or apply the sticky foam to help a second drone lift and carry off an item that may be too dangerous for humans to handle.

Up to now, drones have been tasked with taking cargo to a location. Amazon hopes to use drones to deliver underwear and books to its shoppers.

Believe it or not, the inspiration for mounting a 3D printer on a drone was mined from nature. Biomimicry has driven a lot of innovation in robotics, which is Kovac’s discipline. Adding a 3D printer to a drone came about as an unlikely way to emulate the swiftlet, a bird that builds its nest from its own saliva.

“Swiftlets are like beautiful flying factories that can navigate often treacherous, dark environments to find a suitable place to build nests. Amazingly, they carry inside of them all the materials they need to build their own home. We have taken these traits and adapted them in robotics. Robots that mimic these birds could have enormous benefits, helping humans in construction and in hazardous situations,” Kovac said.

Matternet, like Kovac, has envisioned using drones to help in disasters, though their plans have thus far remained limited to delivering useful items, such as medicine and food rations. (For 3D printers, disaster relief is already old hat.)

With the foam-applying printer on board, Kovac says drones could also remove bombs or dispose of hazardous materials — say, radioactive waste from a crippled reactor. They could also inspect and repair hard-to-reach industrial facilities such as offshore wind farms.

Kovac’s drone, shown off at Imperial’s annual festival, is still very much a prototype. Currently, it can carry just 2.5 kilograms, though the next version could manage 40, according to Kovac. Nor does the drone have the on-board sensors that would allow it to fly safely outside laboratory conditions.

“For full autonomy, it would require onboard sensing and control plus algorithms to distinguish where to print, while also stabilizing its flight based on the scanned environment. While this is technically possible it’s not very easy and is one of the next steps in our development,” Kovac told Singularity Hub.

To make most use of the printer, future versions will also need a 3D scanner. And to reach the remote locations where it could be needed, the drone will require an expanded range. Kovac hopes to replace the battery with a solar fuel cell that would charge while the drone sits atop a tree, like a 21st-century bird.