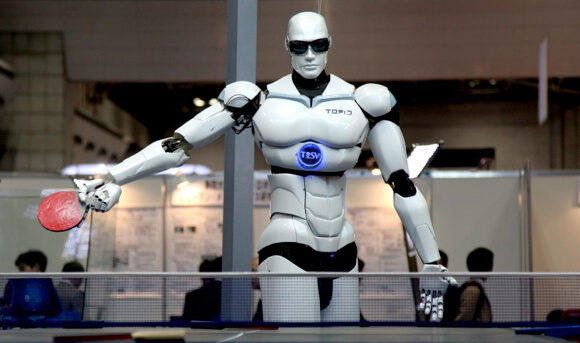 Japan likes robots. And while some Americans raised on a confusing sci-fi diet of Star Wars, Terminator, and iRobot are perhaps a little wary of advanced AI and robotics—Japan simply can’t wait for the “robot revolution.”

In a recent tour of Japanese robotics firms, Japanese prime minister Shinzo Abe declared his intention to create a government task force to study and propose strategies for tripling the size of Japan’s robotics industry to $24 billion.

And one more thing, Abe said, “In 2020, I would like to gather all of the world’s robots and aim to hold an Olympics where they compete in technical skills.”

While mere mortals compete in the 2020 summer Olympics in Tokyo, in a stadium somewhere nearby, the world’s most advanced robots may go head-to-head in events showcasing their considerable prowess (hopefully by then, right?).

Holding an all-robot competition is by no means a new idea. A number of competitions exist. These range from fun (RoboCup and RoboGames) to serious (the DARPA Robotics Challenge). And recently, a Swiss group announced they’ll host a 2016 Olympics of robotically enhanced humans called Cybathlon.

Incentivized competitions can lead to advancements. The Ansari X PRIZE or DARPA Grand Challenge in autonomous cars, for example, whipped up excitement, real improvements, and the teams competing went on to form more permanent projects.

Now, we have Virgin Galactic and Google’s self-driving cars.

Currently, the highest profile competition in robotics is the DARPA Robotics Challenge. The contest, whose first round took place in December, incentivizes teams to engineer useful, autonomous bots to be used in disaster zones. Tasks include climbing ladders, driving cars, using tools, and navigating uneven terrain.

But the current landscape in robotics is a mixed bag. To the untrained eye, the DRC’s bots may appear slow, clumsy, and at odds with viral videos of robots like Boston Dynamics’ bipedal Petman (in fatigues, Petman looks like Terminator in beta).

Don’t get me wrong, these robots are amazing. But beyond performing simple tasks (for humans) like balancing and walking, robots aren’t very autonomous or skilled outside the lab. And power is a perennial challenge.

That said, while we’re still dreaming about owning C-3PO, it isn’t accurate to say that robotics hasn’t already had a significant impact. Industrial robots have been invading manufacturing plants for years, and as they’re becoming more and more intelligent and  aware of their environments, they’re also becoming more ubiquitous.

Foxconn, China’s controversial maker of the iPhone (and many other industrial products), makes no bones about its plans to replace as many human workers as it can in the coming years. The firm recently said 10,000 of their homegrown Foxbots are set to begin work soon, and in the future, 30,000 more will come online annually.

And even absent Abe’s proclamation, Japan is already a mecca for advanced robotics engineering and robot culture.

Big Japanese tech firms like Toshiba, Hitachi, and Toyota all work on robots. Indeed, the robot that dominated the DRC’s first round, SCHAFT, is the creation of a Japanese firm since acquired by Google. And did I mention Japanese plans to build a 60-foot moving Gundam robot (from the classic anime series Mobile Suit Gundam) by 2019?

The robotics revolution is already underway, and it’s only going to accelerate from here.

While a 2020 Tokyo Robolympics (if it happens) might be a great incentive to innovate further, it might also showcase robots already capable of feats that seem only a distant possibility given today’s level of capability. After all, self-driving cars went from failing to finishing the DARPA course in 2004 to logging 140,000 miles on public roads by 2010.