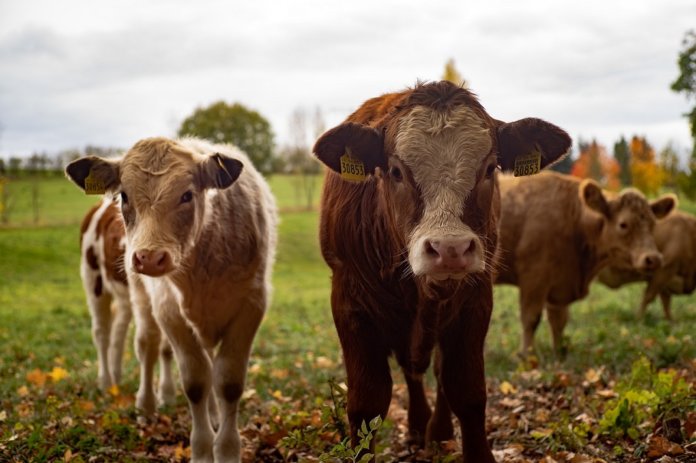 There’s a practice in farming not often talked about. To prevent accidental harm to human handlers and other cattle, bulls generally have their horn-producing cells surgically removed before the horns permanently attach to their skull. Although it’s a common practice, de-horning is a morally-icky procedure that causes additional pain to farm animals, and advocates have long campaigned for more humane solutions.

One idea: what if the bulls never had horns to begin with?

In 2014, Recombinetics, a small startup in Minnesota, began tinkering with a particular variant of a gene called polled. Bulls that have polled naturally don’t grow horns, and traditionally, farmers would preferentially select these hornless bulls for breeding in hopes the trait would pass on to the next generation—a process that takes a decade, if not longer.

We now have the technology to massively speed things up. Using a gene editing tool dubbed TALEN, scientists at Recombinetics stuck the polled genetic variant into bovine cells and cloned them. Two bull calves were born a year later using those cells, with no apparent health issues (and to the relief of scientists studying them, much less aggression and zero accidental gouging).

That was just the beginning. This month, a team at the University of California, Davis, which took over the project, reported that one of the gene-edited cows had sired six healthy calves. They all inherited their father’s genetic tweak: all were born without horns. The results were published in Nature Biotechnology, along with an essay by lead author Dr. Alison L. Van Eenennaam contemplating the ethics, morality, and acceptance of her work by the farming and consumer mainstream.

The story of polled bulls is one example of how farming is silently shifting away from first-generation GMOs (genetically modified organisms) towards gene editing. And scientists have taken heed to historical failures in GMO acceptance. With the rise of CRISPR, scientists can now quickly and cheaply experiment with a myriad of gene-edited crops and other food products. Rather than sticking foreign genes into crops, it’s already possible to mimic naturally-occurring mutations to boost pest-resistant abilities, increase yields, or amp up nutritional values.

The question is, will it be allowed? Here’s how gene editing tools are moving into the food industry, and how lessons from the past can ease its path forward.

The rise of old-school GMOs began in the 1980s, when scientists realized they could take a beneficial gene from almost any source and stick it into another organism as a plug-and-play system. If you’re picturing CRISPR’s surgical snip, that’s not it. These methods relied on blasting a crop, for example tomatoes, and flooding it with a borrowed gene—one that helps winter flounder resist chilly temperatures—with the hope that it’ll integrate somewhere into the tomatoes’ genome. If the alien gene does find a home inside the crop, then voilà—you get frost-resistant tomatoes that can easily survive winter freezes.

As you can guess, anti-freeze fish-tomatoes and their maker Monsanto weren’t a big hit. “Frankenfoods” sparked a global outrage, and even GMOs made with good intent—golden rice, for example, which had extra Vitamin A thanks to a tomato gene—were refused by the very people they were designed to help.

“Genetic engineering has a pretty rough history when it comes to foods,” said Dr. Jennifer Kuzma at the North Carolina State University to Gastropod, an excellent podcast covering the science and history of food. Although there’s been no evidence showing that GMOs are bad for human health—which, to be fair, is very hard to prove—whether these crops harm the environment is still up in the air.

Although GMO wheat, corn, and other crops are frequently used in the US, scientists and farmers have begun shifting their focus to a far more accurate, cheaper, and potentially acceptable way of tinkering with the genome: genetic editing.

We’ve spilled plenty of ink on the merits of CRISPR and older-generation genetic editors such as TALEN. Rather than blindly sticking additional genes into a genome, these are guided approaches that surgically snip out or insert additional genetic material, and as such, are far more precise and predictable. Rather than inserting alien genes into our foods, scientists can now cut out genes detrimental to crop growth, or mimic mutations that provide advantages—a sort of “gene therapy” for food, but for enhancement rather than treatment.

What’s especially admirable about the bull study is the care the team put in. They met multiple times with the FDA during their research to comply with regulatory considerations, which included a genome-wide assessment to show that the edit was as intended, without off-target mutations. Blood work and physical exams showed that the calves were healthy, but four out of six inherited a snippet of bacterial genes, which were used as a vector to deliver the TALEN apparatus.

The study massively differs from traditional GMOs, in that care for the precision of genetic changes and potential harm is placed at an unusually high level—very similar to those for gene therapy in humans. While unintended consequences to crops, animals, humans, or environmental health aren’t yet completely addressed, the fact that the gene edit mimics a naturally-occurring mutation, using a widely-tested and relatively precise tool, is in the team’s favor. Without doubt, more studies assessing off-targets will be needed; but for now, the results look promising for both safety and effectiveness.

Nevertheless, the past is hard to escape.

“Attempts [in the media] were made to conflate ‘genetic engineering’ with genome editing, headings included clickbait terms like ‘antibiotic resistance genes,’ and ‘major screw-up’ which seemed designed to create fear rather than explain the science, reminiscent of the ‘GMO’ discussions,” said Van Eenennaam. “These articles lacked the rest of the story: that such sequences [in the CRISPR carrier] are present in the trillions of bacteria that inhabit our microbiome, that bacterial DNA per se does not pose a hazard, and that the bull and his offspring were found to be perfectly healthy.”

For now, the hornless bulls remain experiments only. But the rise of CRISPR may potentially ease the approval process. The USDA distinguishes between crops or animals edited with alien genes versus “gene therapy”—that is, having their own genes tinkered with. While alien-gene GMOs require hundreds of millions of dollars and decades to approve, CRISPR’d crops may be subjected to a much faster approval process because they don’t have foreign DNA. To scientists and food manufacturers, it’s a blessing; to consumers, it may be a loophole.

And there’s the ultimate test: gene-edited food products will eventually have to face the judgment of average consumers. If history’s any indication, a tidal change may be needed for widespread acceptance.

Van Eenennaam isn’t the only one working on transforming farming. Because CRISPR is relatively cheap, easily accessible, and fairly straightforward to use, scientists are already editing a wide variety of foods—not just cows, but also sheep and “orphan” crops not even available in grocery stores. It’s not only about resisting pesticides or infections, either; CRISPR is already used to dramatically increase yields in rice production, or color carrots with more attractive shades.

“CRISPR has been put into many, many crops—nearly all the crop plants that you can transform,” said Dr. Yiping Qi, a geneticist at the University of Maryland. Just as gene editing tools revitalized gene therapy, turning a pipe dream into reality, scientists are hoping that CRISPR and its fellows will do the same for agriculture, eliminating famine once and for all without placing additional harm on the environment.

To Van Eenennaam, the path forward is all about transparency. “The combination of publicly-funded university researchers, openly providing complete datasets, working alongside federal regulators, identified information that ensured that only correctly developed animals would be taken forward, perhaps one day to the farmers who would like access to elite dairy genetics combined with polled,” she said. In the spirit of freedom of choice, many scientists in the field welcome a genetic-editing tag on such foods, if or when they reach the market.

Without doubt, it would be a shame if a revolutionary solution to one of the world’s greatest challenges is killed off by a small group of vocal protesters based on fear rather than fact.

“Such [gene-editing] work takes time and should be accurately represented and placed in context, not irresponsibly reported beneath sensational headlines,” said Van Eenennaam.