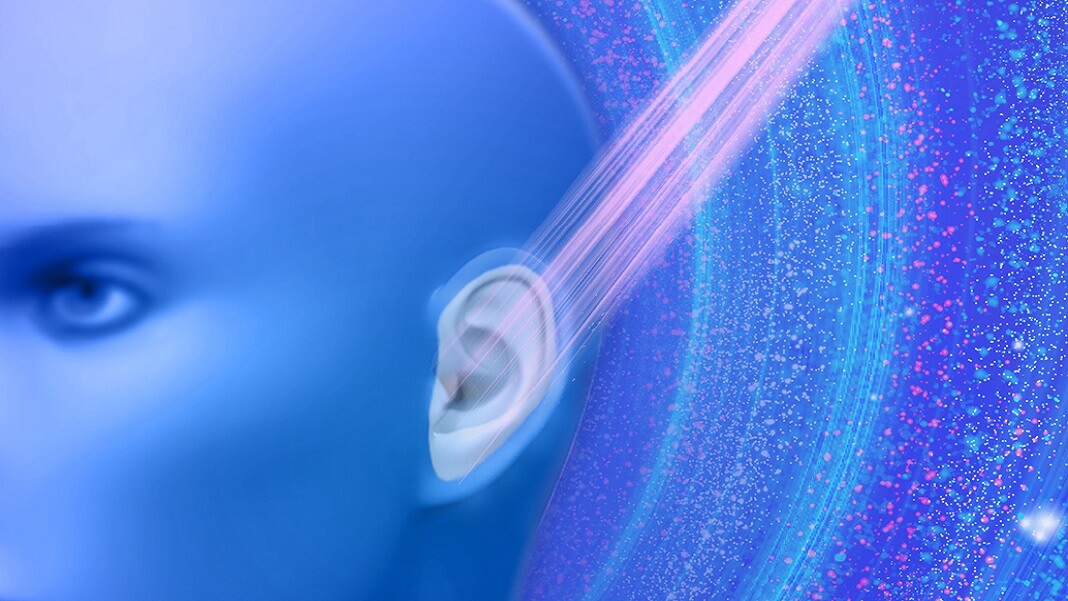 Using nothing but light and bioink, scientists were able to directly print a human ear-like structure under the skin of mice. The team used a healthy ear as a template and 3D printed a mirror image of that ear—tissue layer by tissue layer—directly onto the back of a mouse.

All without a single surgical cut.

If you’re thinking that’s super creepy, yeah…I’m with you. As a proof-of-concept, however, the team shows that it’s possible to build or rebuild tissue layers, even those as intricate as an ear, without requiring surgical implant. This means that it could one day be possible to fix an ear or other surface tissue defects—either genetic or from injuries—directly at the injury site by basically waving a sophisticated light wand.

The technology, (long breath), digital light processing (DLP)–based 3D bioprinting, has gained tons of attention for the past decade due to its versatility. The basic idea is to inject cell-containing bioink into injured tissue, then shine patterns of light non-invasively to “activate” cells in the bioink. Depending on the cell type, they can then repair damaged spinal cords, nerve fibers, or blood vessels.

In this study, published last week in Science Advances, the team took the technique a step further. Using computer-aided design, they designed multiple shapes and fed the data into a digital micromirror device—kind of like a cross between a really fancy camera lens and a tiny house of mirrors.

The device then dynamically generates infrared beams, which penetrates tissue and “builds” the structure of the living tissue. Within 20 seconds, the team was able to generate the basic shape of a human ear on a living mouse, with the ear-like shape maintaining its sophisticated structure for at least a month.

The authors said their work shows that it’s possible to do non-invasive 3D printing directly inside the body, and that it may “open a new avenue for medical 3D printing and advance minimally invasive or noninvasive medicine.”

One of the largest roadblocks in 3D tissue engineering isn’t the technology. Rather, it’s the need for surgery.

Most current bioprinted tissue prototypes are done inside the lab, where scientists can maintain more intricate control of how the tissue grows. For example, lungs generally start with a donated lung specimen, with its cells washed out using detergent, and then repopulated with new donor cells. Other innovative approaches have used apples as scaffolds for ears, or added antibiotics and other medication directly inside 3D-printed bones to help battle inflammation.

The problem with these approaches, the authors write, is that they ultimately require surgery. The tissue needs to be harvested, and surgically inserted into the injured spot, which in turn generates more damage to the implant and surrounding tissues. The consequences range from lengthy hospital stays to repeat surgeries to implant removal, not to mention pain.

These conventional downfalls are partly why light-based tissue printing captured the bioengineering world’s imagination. If certain light waves can penetrate the skin, why not use light to directly activate bioink cells to build the tissue structure from the inside?

For light to build tissue, it needs to fill two tough requirements: one, penetrate tissue. Two, polymerize, or “activate” the bioink cells and supporting matrix to begin self-assembling into structures.

“Conventionally, ultraviolet or blue light is exploited to assist bioprinting…[but they have] poor tissue-penetration capacity,” the team explained. What’s more, ultraviolet light can also cause damage—a “sunburn,” if you will—to the nascent and surrounding tissues.

In contrast, near infrared light, or NIR, can activate bioink and shine deep into tissues. Because different spatial patterns of light can be tuned to activate the bioink differently, both within a layer and between layers, the team decided to play with light-triggered bioprinting.

They first engineered a “nanoinitiator,” a fancy name for a chemical that shines patterned light onto a supporting material—often a hydrogel—to cross-link into solid structures. They then used a computer to design multiple shapes, and sent the data to a computer chip to control the light projection. A handful of NIR light patterns were then projected through a lens and into various tissues injected with bioink, which contained both the nanoinitiator and the cells. The team then sat back and watched their designs come to life, literally.

As a first test, in just 15 seconds, they were able to print a single layer of shell-like structures outside the body. They then amped up their ambition, printing a wide variety of shapes—a three-layered cake, a gingerbread man (no kidding), a starfish, and a baby-chair-like architecture.

They then went for the big game: bioprinting directly inside the body.

It’s quite a bit more difficult, because the level of oxygen within a living organism can inhibit the cross-linking effect, which means the ink can’t become solid structure, the team explained.

But the team hit upon a winner recipe. After a week of bioprinting several shapes onto the backs of living mice, they found that both the new tissue and surrounding tissue were spared from inflammation and other defects.

Going a step further, they input the image of a healthy human ear into their system and generated a mirror image of that ear. They then injected bioink containing chondrocytes—a type of cell that makes up the cartilage structure of the ear—into the back of mice, and shined NIR light that encodes the “personal ear shape” onto the bioink. Within half a minute, the ear gained its shape. Within a month, the printed ear began building its own supporting structures to further maintain its shape.

A Better Way to Heal?

Building new tissue isn’t the only thing the technology can do. In an additional study, the team found that the same approach can heal severe wounds.

Injuries are often caused by crushing or other trauma, the team explained. Previous studies have found that fat-derived stem cells can help tissues regenerate. The team printed a scaffold containing these cells into mice, which suffered from muscle injury, and shined light to activate the printed tissue. Within 10 days, the mice “showed significant wound closure” compared to a control group, the authors said.

Putting it all together: This is the first time scientists have been able to regenerate tissue inside the body, while promoting wound healing, without any need for surgery. Of course, there’s a long way between “building a human ear on the back of a mouse” to “regenerating a wounded ear,” but as proof-of-concept, the study shows that it is possible.

Because light can’t penetrate very deep into the body, there’s also the limitation that the technology can only be used for surface-level tissue. It’s also a mystery whether the mice’s own circulatory systems will infiltrate the printed ear, providing it with nutrients for long-term survival. For now, the bioengineered ear can’t feel—adding a nervous system and hooking it up to the main host still remains a major challenge.

But the future looks bright. “Without surgery implantation, customized living tissue constructs were successfully generated in the body. This work would open a new avenue for 3D printing research and advance the noninvasive medicine field,” the authors concluded.