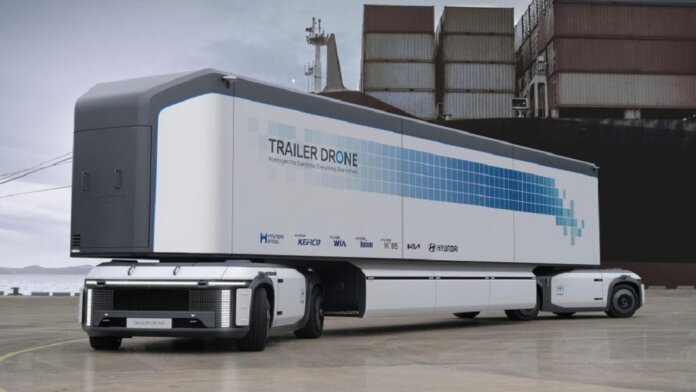 Between the grim outlook reported by the IPCC’s Sixth Assessment Report last month and frequent reports of extreme weather events all over the world, the climate crisis feels like it’s getting more dire by the week. Accordingly, calls for action are intensifying, and companies and governments are scrambling for solutions. Renewables are ramping up, innovative energy storage technologies are being brought to the table, and pledges to go carbon-neutral are piling up as fast as, well, carbon.

South Korea’s Hyundai Motor Group has joined the fray, but on a path that diverges a bit from the crowd; they’re going all-in on hydrogen. At the company’s aptly named Hydrogen Wave Forum this week, it unveiled multiple hydrogen-powered concept vehicles, as well as a strategy for building up its presence in the hydrogen space over the next few years (and decades).

The company unveiled a ground shipping concept it’s calling the Trailer Drone, which sits on a fuel-cell-powered chassis called the e-Bogie. The e-Bogies, named after the frames train cars sit on, have four-wheel independent steering that lets them move in ways normal cars and trucks can’t, like sideways (in crab fashion) or in circles. The modular e-Bogies can be combined to carry different-sized trailers, and can go an estimated 621 miles (1,000 kilometers) on a single fill-up. The system would be autonomous, and the concept doesn’t include a cab or seat for a human driver.

Hyundai also unveiled a hydrogen-powered concept sports car called the Vision FK. The car is a plug-in hybrid, meaning the fuel cell charges a traditional battery. The 500-kilowatt fuel cell gives the car the ability to go from 0 to 100 kilometers per hour in under 4 seconds. The carmaker didn’t give a timeline for when (or whether) the Vision FK would enter production, though.

Finally, Hyundai said it’s working on hydrogen-powered versions of its existing commercial vehicles, and plans to bring those to market by 2028.

Hyundai is by no means new to the hydrogen game; the company already has fuel-cell-powered trucks and buses on the roads, including its Xcient truck, which is in use in Switzerland, and its Elec City Fuel Cell bus, which is on roads in South Korea and being trialed in Germany.

One of the technology’s biggest detractors is none other than Elon Musk, who finds hydrogen fuel cells “extremely silly.” But Toyota would disagree with Musk’s take; the company is building a hydrogen-powered prototype city near the base of Mount Fuji called Woven City.

For its part, Hyundai is aiming to get its fuel cell powertrain to a point where it can compete cost-wise with electric vehicle batteries by 2030.

A study released earlier this year by McKinsey’s hydrogen council found that when you factor in the relative efficiencies of the power sources and lifetime costs of a truck, green hydrogen could reach cost parity with diesel by 2030. A paper published in Joule last month laid out a road map for building a green hydrogen economy.

Despite these promising outlooks, it’s still highly uncertain whether hydrogen will become a widespread, cost-effective energy source. But it seems we’re getting to a point where it’s worth looking into any option that could make the future of the planet look brighter than it does right now.