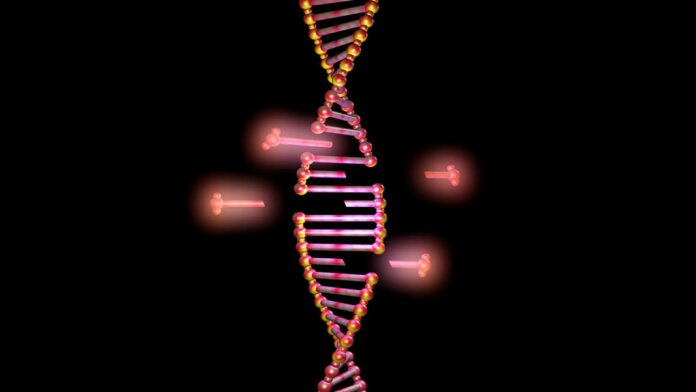 Thanks to CRISPR, gene therapy and “designer babies” are now a reality. The gene editing Swiss army knife is one of the most impactful biomedical discoveries of the last decade. Now a new study suggests we’ve just begun dipping our toes into the CRISPR pond.

CRISPR-Cas9 comes from lowly origins. It was first discovered as a natural mechanism in bacteria and yeast cells to help fight off invading viruses. This led Dr. Feng Zhang, one of the pioneers of the technology, to ask: where did this system evolve from? Are there any other branches of the CRISPR family tree that we can also harness for gene editing?

In a new paper published last week in Science, Zhang’s team traced the origins of CRISPR to unveil a vast universe of potential gene editing tools. As “cousins” of CRISPR, these new proteins can readily snip targeted genes inside Petri dishes, similar to their famous relative.

But unlike previous CRISPR variants, these are an entirely new family line. Collectively dubbed OMEGA, they operate similarly to CRISPR. However, they use completely foreign “scissor” proteins, along with alien RNA guides previously unfamiliar to scientists.

What came as a total surprise was the abundance of these alternative systems. A big data search found over a million potential genetic sites that encode just one of these cousins, far more widespread “than previously suspected.” These newly-discovered classes of proteins have “strong potential for developing as biotechnologies,” the authors said.

In other words, the next gene editing wunderkind could be silently waiting inside another bacteria or algae, ready to be re-engineered to snip, edit, and alter our own genomes for the next genetic revolution.

The Many Variations of CRISPR

The first CRISPR system that came to fame was CRISPR-Cas9. The idea is simple but brilliant. Using a genetic vector—a round Trojan horse of sorts that delivers genes into cells—scientists can encode the two components for gene editing. One is a guide RNA, which directs the system to the target gene. The other is Cas9, the “scissors” that break the gene. Once a gene is snipped, it wants to heal. During this process it’s possible to insert new genetic code, delete old code, or shift the code in a way that inactivates subsequent genes.

Thanks to its relative simplicity, CRISPR didn’t just take off—it skyrocketed. Subsequent studies found variants optimized for slightly different tasks. For example, there are Cas9 varieties that have very low off-target activity or are smaller, making them easier to package and deliver into cells. Others include base editors, which swap a DNA letter without breaking the chain, or RNA editors, which edit RNA chains like a Word processor.

The burgeoning CRISPR pantheon was in part because of different Cas “scissor” proteins. Although thousands of variations exist, wrote Dr. Lucas Harrington at the University of California, Berkeley, who worked with CRISPR pioneer Dr. Jennifer Doudna, “gene editing experiments have largely focused on a small subset of representatives.” Scanning for new variants in nature, the team identified powerful new Cas proteins that retain their activity in high heat, and extremely compact ones that can sneak into nooks and crannies of the genome that otherwise block classic Cas proteins. The power of Cas variants persuaded scientists to artificially evolve new proteins with more optimized features.

But what if the secret to better gene editing tools isn’t just looking forward? What if it’s to peek back in time?

The new study took this approach: scan through evolutionary history to trace the origins of CRISPR-Cas9.

Like tracing any family tree, it starts with knowing thyself. Cas9 belongs to a family called “RNA-guided nucleases.” Basically, these proteins can be shepherded by RNA guides, and they have the ability to cut genetic material.

Back in 2015, a study suggested one evolutionary root of Cas9. It’s weird: a bunch of “jumping genes,” or genetic components that can bounce around our genome. When first discovered in the 1960s, these jumpers—known as transposons—were largely dismissed as junk DNA. But subsequent studies found that they’re far more active than originally thought, with the power to regulate the workings of other genes, and in some cases encode mysterious proteins themselves.

One of those is IscB, an ancient protein relic that likely evolved into Cas9.

IscB graced the team’s radar because of its similarity to Cas9, both in terms of its protein structure and its domains. Picture a protein as a gaming controller. Most of the plastic backbone is there to support the overall structure—only a few buttons actually issue commands. A protein is similar, in that it contains domains, or “buttons” that talk to other components of the cell.

These domains are generally preserved within a family of proteins. With a gaming controller, you can mostly tell by its buttons and shape if it’s for an Atari, Sega, Xbox, or Playstation. Similarly, if different proteins share similar domains, scientists can tell if they came from the same lineage.

The team used computers to scan for three Cas9 domains, encoded in the genome, in IscB proteins. Eventually, out of over 2,800, they found 31 unique genetic sites that seem to be associated with CRISPR activity. Subsequent experiments found that these proteins can efficiently snip genetic material with guidance from an RNA guide.

“To us, this suggests that IscB—the CRISPR-Cas ancestor—shares a core gene that is prone to evolving into a CRISPR-like system,” the authors wrote.

If the CRISPR-Cas ancestor also has genome-snipping abilities, what happened to its other family branches?

Using AI, the team constructed a family tree of the protein domains. The resulting tree had multiple Cas9-like children, such as IsrB and TnpB (yeah, catchy I know). Amazingly, each of these proteins seems to have evolved from a separate, unique evolutionary event. Each also has its own “taste” in the makeup of its RNA guides.

But do they work? The team found IsrB genes inside a type of green algae, which was able to cleave DNA easily in the lab. A screen of 6 similar proteins with 12 guides each also found one that snips human genomes inside a cultured kidney cell.

The ancestry screen also found another family of similar proteins, TnpB, which “are thought to be the ancestor of Cas12,” the authors said. Unlike Cas9, Cas12 can happily chop single-stranded DNA—for example, for detecting viral genetic material during an infection.

Together, the team dubbed these new genomic scissors “OMEGA,” or Obligate Mobile Element Guided Activity. It sounds like retro-future nerd speak, but the idea is that these mobile genetic elements, which went down a different evolutionary path than Cas proteins, can be guided for altering the genome.

For now, we don’t yet fully understand what OMEGA systems naturally do in their hosts. We do know that they’re incredibly widespread—far more than scientists previously imagined. The Cas12-like family of proteins, TnpB, has more than a million potential sites in bacteria genomes.

It might “represent an untapped wealth” of tools similar to CRISPR-Cas9, but potentially with its own intricacies and strengths. We don’t yet know if the new tools can match the proficiency of our current CRISPR, or if they bring new abilities to the table. But the gene editing universe just vastly expanded. And without doubt, the hunt for the next revolutionary tool is on.