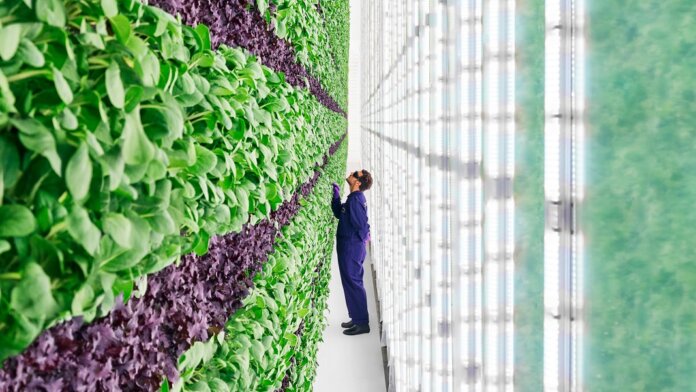 Vertical farming is quickly becoming a popular way to grow organic food close to major urban centers. Indoor “farms” that grow crops in stacked trays using LED light have opened or are underway in Singapore, Japan, the UK, US, and elsewhere. But despite the steady rise of this technology, the food grown in vertical farms is still perceived by many potential consumers as inaccessible, available only in high-end or specialty stores.

But this is about to change, after an announcement this week from America’s biggest retailer: Walmart. Consumers in California will soon be able to buy vertical-farm-grown greens in Walmart stores throughout the state. As part of a $400 million Series E funding round that also included SoftBank Group’s tech-focused Vision Fund, Walmart bought an equity stake in South San Francisco-based vertical farming startup Plenty.

The move makes Walmart the first major US retailer to put a significant investment into vertical farming, and according to Martin Mundo, who oversees Walmart’s US produce purchasing, the company’s choice to invest in Plenty was very intentional; Walmart executives looked into several other indoor farming companies over the course of four years, but chose Plenty because of its high yields and its work towards growing fruits and vegetables (in addition to greens).

Plenty’s newly-appointed CEO, Arama Kukutai, told Reuters that the company increased yields in its leafy green growing rooms by 700 percent in just 2 years (preceded, importantly, by a decade of research and development).

Plenty’s technology is slightly different from that of other vertical farms, most of which grow crops in horizontal layers of stacked trays. Plenty’s greens actually grow vertically, sprouting off tall towers with a modular setup. The company says this system enables them to use just one percent of the land required by traditional farming while improving yields 150-350 times per acre. Like one of Europe’s biggest vertical farms, located in Denmark, Plenty also uses robots to plant, feed, and harvest its crops.

The company is building a 95,000-square-foot facility in Compton, California, south of Los Angeles, with production scheduled to start later this year. This is where the greens for Walmart stores will be sourced from, with some sold under Plenty’s brand and others under Walmart’s private label. The greens will be available at all 250 of Walmart’s California stores. The Walmart deal, Kukutai said, “…creates the opportunity to actually get to scale, not just being a niche provider of expensive greens, as the category has somewhat been accused of in the past.”

After getting the Compton facility up and running, Plenty hopes to expand its presence to the east coast (where it will have competition from Upward Farms’ 250,000-square-foot facility, currently under construction in Luzerne County, Pennsylvania). Plenty also plans to start growing strawberries and tomatoes and selling them to customers in 2023.