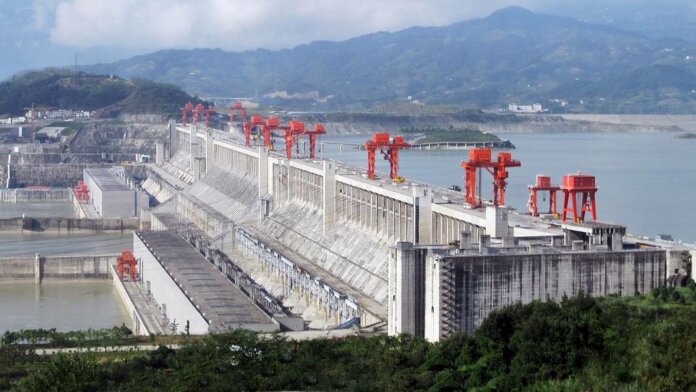 As the world rushes to stop burning fossil fuels and implement more renewable sources of power, there’s a lot of hype around solar and wind. While they’re comparatively easier to get up and running, these energy sources don’t have nearly the same output capacity—or consistency—as hydropower. China is investing big in all of the above, most recently announcing construction of a massive dam on the Yellow River in Qinghai Province, which is located on the Tibetan plateau.

Once complete, Yangqu Dam is predicted to generate almost five billion kilowatt hours of electricity per year—that’s half a billion more than Arizona’s Hoover Dam—and plans are for it to be built entirely by robots, without any human labor.

A paper published last month in the Journal of Tsinghua University details a “3D printing system” that uses AI and robots for filling large construction projects. Based on the description, though, it’s a bit of a misnomer to equate the system with 3D printing; while smaller construction projects like 3D printed houses use a printer that spits out a concrete mixture layer by layer, there’s no mention of a printer in this project description.

Rather, a construction scheduling system evaluates a digital design model of the project section by section, calculating how much filling material is needed, then has a robot gather the material and transport it to its intended section. The robots do “intelligent paving and rolling” to finish a construction layer, then send feedback to the scheduling system. It’s 3D printing in that a very tall structure will go up layer by layer using an automated process, but mostly, it’s not 3D printing because there’s not a printer.

The project isn’t being undertaken from scratch—that is, there’s already a dam at this location, which was built starting in 2010, along with a 1200-megawatt hydropower station. The existing facility is being expanded.

Human workers will be needed to mine some of the construction materials, but the project’s heavy automation ideally means it will be completed faster and with fewer errors than human labor would allow; machines can work 12-hour shifts, or even around the clock. Plans are for the first section to become operational in 2024, and the entire project to be up and running the following year.

For comparison’s sake, the Hoover Dam is 726 feet tall and took 5 years to build. And as it turns out, building a dam is treacherous work: 96 people died during construction of the Hoover Dam from causes like drowning, being struck by falling construction materials, or being injured in blasts to clear out natural rock. Another plus of machine labor, then, is that human safety won’t be endangered.

The Chinese are no strangers to building massive dams; Three Gorges Dam on the Yangtze River in Hubei Province is the biggest hydroelectric power plant in the world. At 594 feet tall, it’s almost exactly the same height as Yangqu will be once complete, but it’s much wider.

China is aiming to reach carbon neutrality by 2060. To have any chance of meeting that target they’re going to need a lot more than solar panels and wind turbines; this is one of several dams being built in the country (to add to the many thousand already there), and they’re going all-in on nuclear too.

In China as in the rest of the world, the renewable energy transition is slowly but surely underway. The Yangqu Dam is highly ambitious, but if successful, it won’t be the first time China proves naysayers wrong.