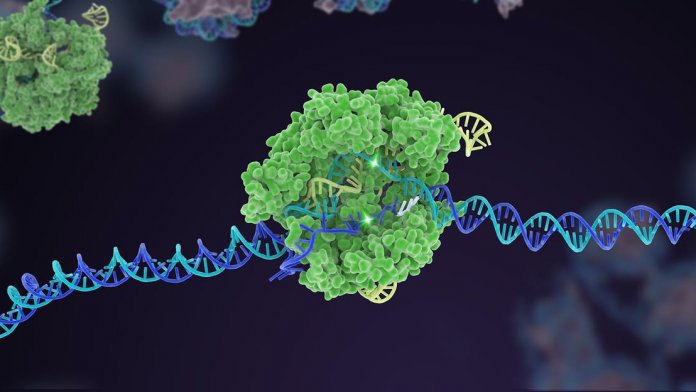 Ten years ago, a little-known bacterial defense mechanism skyrocketed to fame as a powerful genome editor. In the decade since, CRISPR-Cas9 has spun off multiple variants, expanding into a comprehensive toolbox that can edit the genetic code of life.

Far from an ivory tower pursuit, its practical uses in research, healthcare, and agriculture came fast and furious.

You’ve seen the headlines. The FDA approved its use in tackling the underlying genetic mutation for sickle cell disease. Some researchers edited immune cells to fight untreatable blood cancers in children. Others took pig-to-human organ transplants from dream to reality in an attempt to alleviate the shortage of donor organs. Recent work aims to help millions of people with high cholesterol—and potentially bring CRISPR-based gene therapy to the masses—by lowering their chances of heart disease with a single injection.

But to Dr. Jennifer Doudna, who won the Nobel Prize in 2020 for her role in developing CRISPR, we’re just scratching the surface of its potential. Together with graduate student Joy Wang, Doudna laid out a roadmap for the technology’s next decade in an article in Science.

If the 2010s were focused on establishing the CRISPR toolbox and proving its effectiveness, this decade is when the technology reaches its full potential. From CRISPR-based therapies and large-scale screens for disease diagnostics to engineering high-yield crops and nutritious foods, the technology “and its potential impact are still in their early stages,” the authors wrote.

A Decade of Highlights

We’ve spilt plenty of ink on CRISPR advances, but it pays to revisit the past to predict the future—and potentially scout out problems along the way.

One early highlight was CRISPR’s incredible ability to rapidly engineer animal models of disease. Its original form easily snips away a targeted gene in a very early embryo, which when transplanted into a womb can generate genetically modified mice in just a month, compared to a year using previous methods. Additional CRISPR versions, such as base editing—swapping one genetic letter for another—and prime editing—which snips the DNA without cutting both strands—further boosted the toolkit’s flexibility at engineering genetically-altered organoids (think mini-brains) and animals. CRISPR rapidly established dozens of models for some of our most devasting and perplexing diseases, including various cancers, Alzheimer’s, and Duchenne muscular dystrophy—a degenerative disorder in which the muscle slowly wastes away. Dozens of CRISPR-based trials are now in the works.

CRISPR also accelerated genetic screening into the big data age. Rather than targeting one gene at a time, it’s now possible to silence, or activate, thousands of genes in parallel, forming a sort of Rosetta stone for translating genetic perturbations into biological changes. This is especially important for understanding genetic interactions, such as those in cancer or aging that we weren’t previously privy to, and gaining new ammunition for drug development.

But a crowning achievement for CRISPR was multiplexed editing. Like simultaneously tapping on multiple piano keys, this type of genetic engineering targets multiple specific DNA areas, rapidly changing a genome’s genetic makeup in one go.

The technology works in plants and animals. For eons, people have painstakingly bred crops with desirable features—be it color, size, taste, nutrition, or disease resilience. CRISPR can help select for multiple traits or even domesticate new crops in just one generation. CRISPR-generated hornless bulls, nutrient rich tomatoes, and hyper-muscular farm animals and fish are already reality. With the world population hitting 8 billion in 2022 and millions suffering from hunger, CRISPRed-crops may lend a lifeline—that is, if people are willing to accept the technology.

Where do we go from here?

To the authors, we need to further boost CRISPR’s effectiveness and build trust. This means going back to the basics to increase the tool’s editing accuracy and precision. Here, platforms to rapidly evolve Cas enzymes, the “scissor” component of the CRISPR machinery, are critical.

There have already been successes: one Cas version, for example, acts as a guardrail for the targeting component—the sgRNA “bloodhound.” In classic CRISPR, the sgRNA works alone, but in this updated version, it struggles to bind without Cas assistance. This trick helps tailor the edit to a specific DNA site and increases accuracy so the cut works as predicted.

Similar strategies can also boost precision with fewer side effects or insert new genes in cells such as neurons and others that no longer divide. While already possible with prime editing, its efficiency can be 30 times lower than classic CRISPR mechanisms.

“A main goal for prime editing in the next decade is improving efficiency without compromising editing product purity—an outcome that has the potential to turn prime editing into one of the most versatile tools for precision editing,” the authors said.

But perhaps more important is delivery, which remains a bottleneck especially for therapeutics. Currently, CRISPR is generally used on cells outside the body that are infused back—as in the case of CAR-T—or in some cases, tethered to a viral carrier or encapsulated in fatty bubbles and injected into the body. There have been successes: in 2021, the FDA approved the first CRISPR-based shot to tackled a genetic blood disease, transthyretin amyloidosis.

Yet both strategies are problematic: not many types of cells can survive the CAR-T treatment—dying when reintroduced into the body—and targeting specific tissues and organs remains mostly out of reach for injectable therapies.

A key advance for the next decade, the authors said, is to shuttle the CRISPR cargo into the targeted tissue without harm and release the gene editor at its intended spot. Each of these steps, though seemingly simple on paper, presents its own set of challenges that will require both bioengineering and innovation to overcome.

Finally, CRISPR can synergize with other technological advances, the authors said. For example, by tapping into cell imaging and machine learning, we could soon engineer even more efficient genome editors. Thanks to faster and cheaper DNA sequencing, we can then easily monitor gene-editing consequences. These data can then provide a kind of feedback mechanism with which to engineer even more powerful genome editors in a virtuous loop.

Although further expanding the CRISPR toolbox is on the agenda, the technology is sufficiently mature to impact the real world in its second decade, the authors said.

In the near future, we should see “an increased number of CRISPR-based treatments moving to later stages of clinical trials.” Looking further ahead, the technology, or its variants, could make pig-to-human organ xenotransplants routine, rather than experimental. Large-scale screens for genes that lead to aging or degenerative brain or heart diseases—our top killers today—could yield prophylactic CRISPR-based treatments. It’s no easy task: we need both knowledge of the genetics underlying multifaceted genetic diseases—that is, when multiple genes come into play—and a way to deliver the editing tools to their target. “But the potential benefits may drive innovation in these areas well beyond what is possible today,” the authors said.

Yet with greater power comes greater responsibility. CRISPR has advanced at breakneck speed, and regulatory agencies and the public are still struggling to catch up. Perhaps the most notorious example was that of the CRISPR babies, where experiments carried out against global ethical guidelines propelled an international consortium to lay down a red line for human germ-cell editing.

Similarly, genetically modified organisms (GMOs) remain a controversial topic. Although CRISPR is far more precise than previous genetic tools, it’ll be up to consumers to decide whether to welcome a new generation of human-evolved foods—both plant and animal.

These are important conversations that need global discourse as CRISPR enters its second decade. But to the authors, the future looks bright.

“Just as during the advent of CRISPR genome editing, a combination of scientific curiosity and the desire to benefit society will drive the next decade of innovation in CRISPR technology,” they said. “By continuing to explore the natural world, we will discover what cannot be imagined and put it to real-world use for the benefit of the planet.”