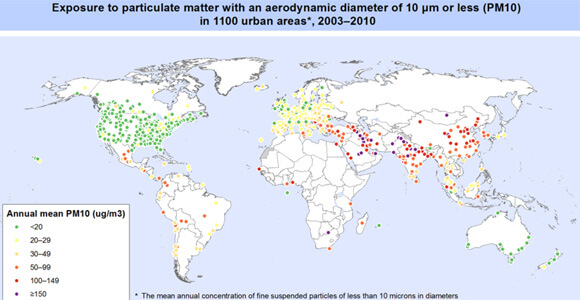 The Industrial Revolution may seem like a thing of the past to residents of developed countries, but those who live in developing countries are still very much in the thick of it. Air pollution claimed 7 million lives in 2012, according to a report just released by the World Health Organization, with the vast majority of deaths occurring in low- and middle-income countries.

One out of every eight premature deaths in 2012 was attributable to air pollution, the numbers reveal — a rate double that reported in previous years due to more accurate measures of pollution in both outdoor and indoor environments and in a broader range of rural areas.

The numbers also reveal that the link between air pollution and cardiovascular disease and cancer is even stronger than previously believed. A recent analysis of life expectancy in more and less polluted regions of China also suggested that air quality levies a high tax on health than documented in prior studies.

“The risks from air pollution are now far greater than previously thought or understood, particularly for heart disease and strokes. Few risks have a greater impact on global health today than air pollution,” Maria Neira, director of the WHO’s Department of Public Health, Environmental and Social Determinants of Health, said in a news release. 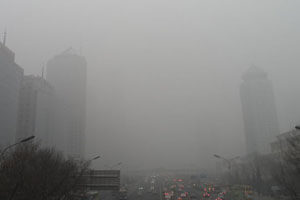 The most dangerous form of outdoor air pollution is the particulate matter from coal-burning power plants and diesel vehicles. Indoor air pollution, as defined in the study, stems from the use of coal, wood or biomass (mostly dung) as cooking fuel.

Cooking over an open fire is equivalent to burning 400 cigarettes an hour, according to environmental health pioneer Kirk Smith of the University of California at Berkeley, whom WHO cited in materials supporting the report.

Indoor air pollutants played a role in 4.3 million of the deaths, while ambient pollution figured in 3.7 million, the agency said. Some deaths resulted from exposure to both, capping the total at 7 million.

Western Pacific nations, which include China and Japan along with Pacific Islands, suffered highest per capita death rates from both types of pollution. Southeast Asia and Africa were hard hit by indoor air pollution.

Outdoor air pollution was worst in the cities of Arab nations and northern India — countries which also saw the highest per capita deaths. But the pattern of deaths also revealed economic rifts within countries. Per capita death rates were significantly higher among low- and middle-income nations in Europe and the Western Pacific region. 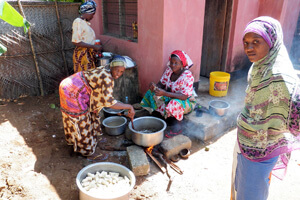 In the Americas, by contrast, per capita deaths were more than twice as high in more affluent nations.

Although the organization has not yet released data breaking death rates down by country, it did identify failure to implement cleaner alternatives for transportation, energy and industry as the core problems — a correlation reflected in the fact that the dirtiest cities were not the economic powerhouses of India and China, which have fallen into the second tier after efforts to improve air quality.

“Excessive air pollution is often a by-product of unsustainable policies in sectors such as transport, energy, waste management and industry. In most cases, healthier strategies will also be more economical in the long term due to health-care cost savings as well as climate gains,” said Carlos Dora, coordinator for Public Health, Environmental and Social Determinants of Health at the WHO.

Certainly there are innovative ideas on how to clean up at least the transport and energy sectors, including self-driving cars, trucks and ships and cleaner sources of fuel and electricity. But U.N. and WHO efforts indicate that many developing countries have yet to take even basic steps, such as replacing older diesel vehicles with newer, cleaner models and designing roads and signage to ease congestion.

The WHO said it plans to devise a road map for preventing cancers and cardiovascular diseases related to air pollution and will step in to provide guidance for countries as they adopt international recommendations, expanding its traditionally narrow focus on health.