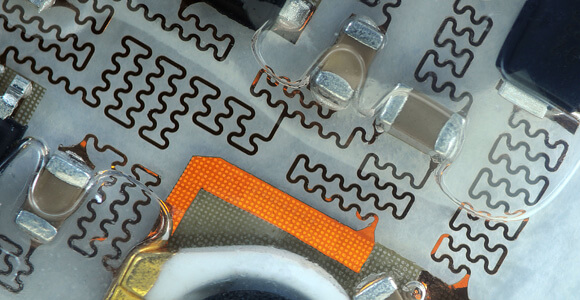 It could be easy to conclude, eyeing the number of Fitbits, Fuel bands and competitors in a roomful of people in London, New York or San Francisco, that wearable computing has already arrived. But wearables are at the stage personal computers were back in the days of floppy disks. To take but one problem: The wristbands that aim to monitor body processes don’t have a stable connection to the body.

Flexible electronic componentry is one plausible solution, making it possible for wearable electronics to sit directly on the skin as an adhesive patch, for example. University of Illinois materials scientist John Rogers has pioneered flexible electronic patches in a series of influential papers.

The trouble is, it’s taken years to amass the manufacturing refinements and economies of scale that make computer chips cheap enough for many of us to own several computerized devices, and using the new flexible parts would scuttle cost savings.

So Rogers is now proposing a Plan B: a wearable electronic patch that incorporates standard silicon chips. The patch uses a microfluidic construction with wires folded to allow it to bend and flex around the rigid off-the-shelf chips. The patch doesn’t need wires for power, either, because it relies on a resonant inductive coupling charger.

“Our original epidermal devices exploited specialized device geometries. But chip-scale devices, batteries, capacitors and other components must be re-formulated for these platforms. There’s a lot of value in complementing this specialized strategy with our new concepts in microfluidics and origami interconnects to enable compatibility with commercial off-the-shelf parts for accelerated development, reduced costs and expanded options in device types,” Rogers said in a news release.

The latest patch is essentially a thin elastic envelope filled with fluid. The chip components sit suspended on tiny raised supports; tightly folded wires connect the electronics components, including power inductors, sensors and transmitters to track and communicate health data. Folded like origami, the wires can unfold in any direction to accommodate twisting and stretching of the patch while the chips remain in place.

Cheaper than nanotechnology-based electronics patches, the computerized patch works as well as clunky conventional sensors like those used for EKG and EEG monitoring and picks up less noise than consumer fitness trackers, according to a recent study co-authored by Rogers and Yonggang Huang of Northwestern University and published in the journal Science.

The researchers hope that it’s a magical combination that will let doctors get better data sooner, enabling them to provide better diagnoses.

“If we can continuously monitor our health with a comfortable, small device that attaches to our skin, it could be possible to catch health conditions before experiencing pain, discomfort and illness,” Huang said.

The prototype doesn’t quite look comfortable enough yet for consumers to willingly wear it all day, every day. But proving it’s possible to use standard chips in technology that can be worn directly on the skin opens up a lot of possibilities, from more accurate pedometers to first-sign diagnoses of many major illnesses not to mention body-mounted password black boxes.