Anyone who says fully digitized medicine is off on a 10-year horizon is wrong. The future of medicine and healthcare is here today.

If you need proof, can you guess what Stanford University’s top gastroenterologist prescribed me the other week? A digital smart pill.

To bring you inside the Expo Hall and the Healthcare Innovation Lab, we’ll also have exclusive live videos on Hub’s Facebook page.

IBM’s AI Watson is predicting disease, Intuitive Surgical’s da Vinci robotic-assisted system has reinvented minimally-invasive surgery, and new brain chips like Kernel may democratize “brain boosting.” This doesn’t even touch on the biotech revolution that is underway, unlocking our understanding of the human genome, and so much more.

We can’t wait to hear from over 80 experts in the field about what’s to come. So, stay tuned.

Here are a few Singularity Hub articles to give you a glimpse of developments in the healthcare and medical tech space.

The Future of Healthcare Is Arriving—8 Exciting Areas to Watch
“There remain significant regulatory, reimbursement, data privacy and adoption challenges (to name a few), but below are eight examples of fast moving, often convergent technologies which are already beginning to be applied effectively to health, prevention, diagnosis, therapy, clinical trials and beyond.” –Daniel Kraft

Surprising Embryo Study Pushes the Limits of How Life Begins
“In a nutshell, a team of British scientist led by Dr. Anthony Perry at the University of Bath used chemicals to transform a mouse egg cell into a bizarre entity called a parthenogenote that behaves somewhat like a fertilized embryo, but with only the mother’s genes.” –Shelly Fan

Deep Learning AI Better Than Your Doctor at Finding Cancer
“Deep learning is moving fast and will have broad impact. But Howard goes further. He likens the technology to the internet in the 90s, and that’s why he felt so compelled to update his talk. Although some people are already working on the tech, many more aren’t there yet. TensorFlow may open the floodgates, may make deep learning go even faster.” –Jason Dorrier 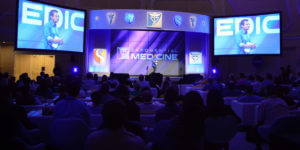 A Look at IBM’s Watson 5 Years After Its Breathtaking Jeopardy Debut
“Watson beat two of Jeopardy’s all-time champions a year earlier in 2011, and the world was stunned. It was the first widespread and successful demonstration of a natural language processing computer of its class. Combined with the popularity of Jeopardy, Watson became an immediate mainstream icon…Now, four years later, we thought we’d see what Watson has been up to since then. Are we where we thought we’d be?” –Alison E. Berman

The Most Detailed Snapshot of Human Health in History
“As we digitize intimate information, it isn’t just about analysis; it’s also about how we access, store, and share it. If we can’t see our own information or feel uncomfortable giving it to doctors or that powerful deep learning algorithm in the cloud—what’s the point?” –Jason Dorrier

Biohacking Will Let You Connect Your Body to Anything You Want
“The field where biohacking can make the most positive impact is health. In addition to pacemakers and insulin monitors, several new technologies are being developed with the goal of improving our health and simplifying access to information about our bodies.” –Vanessa Bates Ramirez

The Future of the Quantified Brain
“Big leaps in neuroscience are not just impacting researchers—they’re trickling into direct-to-consumer products and advancing all things quantified self. We are moving into an era that some are calling a ‘brain-based future,’ where any individual will be empowered to take their mind into their own hands.” –Alison E. Berman

New 3D Printed Ovaries Allow Infertile Mice to Give Birth
“Here’s the scoop: scientists at Northwestern University 3D printed a functional ovary out of Jello-like material and living cells. When implanted into mice that had their ovaries removed, the moms regained their monthly cycle and gave birth to healthy pups.” –Shelly Fan

The Most Advanced Nanotechnology Today Is Already Inside You
“Why is nanotechnology such a tough nut to crack? Stuff doesn’t obey the same rules on the nanoscale. You have to do away with smooth lines, Hessel said. Everything is alive, dynamic, constantly moving. The physics is different. The time scales are bizarre.” –Jason Dorrier

How Nanotech Will Lead to a Better Future for Us All (Interview)
“In the last decade, nanotechnology has advanced and is finding practical applications. Some teams are developing nanoscale patterns on medical implants that can stimulate bone cell growth and positive gene expression. Others are working to make guided nanoparticles that detect (and even destroy) cancer cells.” –Alison E. Berman

A Simple Blood Test Helps Cure Cancer by Catching It Early
“Miroculus, a precision medicine startup, wants to create widespread access to affordable early-stage cancer detection. ‘Having lost loved ones to cancer greatly contributed in the decision to try and tackle this problem,’ said CEO Alejandro Tocigl. The company is building a 3D-printed device called Miriam that will be able to use a small blood sample to diagnose early stage cancer.” –Alison E. Berman