The Gene Therapy Trial Aiming to Fend Off Alzheimer’s 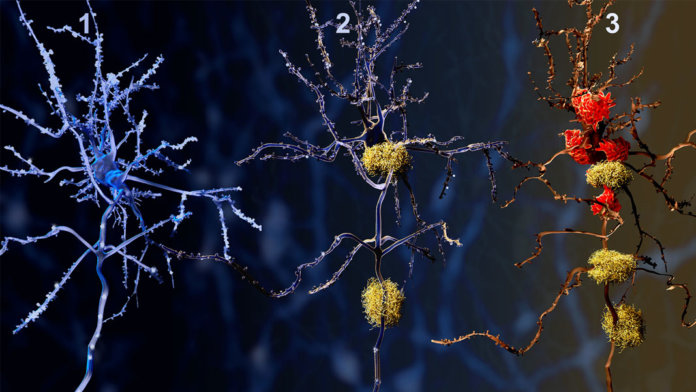 There’s a test for Alzheimer’s risk that genetic counselors don’t like to talk about.

It’s not that they’re hiding the information—rather, it’s because Alzheimer’s has no cure. There are no consensus methods to actively prevent it, treat it, or even delay the symptoms. And losing one’s treasured memories, mind, and eventually, sense of self is perhaps a more terrifying prospect than cancer.

The test is for APOE, a gene that’s involved in shuttling fatty molecules in our blood. Scientists can’t yet comprehensively explain why exactly that gene is linked to Alzheimer’s, but we know that it comes in three forms: APOE4 massively increases the chance of getting the brain-destroying disorder, and APOE3 is neutral in that it doesn’t affect Alzheimer’s risk.

But APOE2? That’s the holy grail—it’s a protective form of the gene that seems to counteract its super-villain sibling APOE4 in animal models. APOE2 is the winning genetic lottery when it comes to Alzheimer’s.

And now, for the first time, a team from New York City wants to spread the winnings to people who are already showing the first signs of Alzheimer’s.

In a pioneering first, Dr. Ronald Crystal at the Weill Cornell Medicine is planning to use a virus to deliver the protective APOE variant into those experiencing dementia. By flooding their brains with APOE2, the hope is that the superhero variant can drown out negative influences of APOE4—and eventually, protect an at-risk brain before symptoms ever develop.

This isn’t the first time someone has tried gene therapy for Alzheimer’s. A few previous scattered attempts managed to deliver a neuron-protective protein into patients’ brains, in the hopes that it would boost their health and regeneration in the face of a devastatingly destructive force. It didn’t work.

Crystal’s trial is the first time scientists are targeting a gene variant so conclusively linked to Alzheimer’s risk—to the point it’s dubbed the “forgetting gene”—that it’s shocking we still don’t know much about it.

Back in 1991, a team was trying to hunt down proteins that tag onto amyloid-beta, the main protein resident that makes up clumps found in the brains of people with Alzheimer’s. Getting to know amyloid’s neighbors, they reasoned, could potentially help them understand amyloid’s role in the brain—and how it goes wrong.

High on the list of proteins they fished out is APOE, a gene that had no obvious connection to Alzheimer’s, except that it is situated on chromosome 19, in a region previously associated with risk of getting the disease.

“It was like a lightning bolt. It changed my life,” said Dr. Allen Roses at Duke University, who led the finding.

Up until then, no one had really found a single gene that prominently influences the disorder. One copy of APOE4 from either mom or dad increases the risk of developing Alzheimer’s four-fold. Two copies increase the risk 12-fold. APOE is a smoking gun—yet it was ignored for decades, to the point that even now we don’t quite know what the different variants are doing in the brain.

Part of the reason APOE was brushed aside is because it’s hard to control. At the turn of the century, scientists simply didn’t have the molecular tools available to perform genetic surgery on cells.

Around the same time, the amyloid-beta hypnosis also took off. Just as trash pollutes our cities, the reasoning went, trash protein clumps also destroy brain cells. For twenty years, academics and industry focused on getting rid of those nasty waste clumps. Nothing worked, to the point their collective efforts were called the graveyard of dreams.

“The amyloid hypothesis became such a strong scientific orthodoxy that it began to be accepted on the basis of faith rather than evidence,” said Zaven Khachaturian, president of the non-profit campaign Prevent Alzheimer’s Disease 2020. “No one has stepped back to ask the fundamental question of whether our basic premise about the disease is the correct one”.

According to MIT Technology Review, with the gene therapy trial, Crystal is hoping to sidestep the whole controversy of what causes Alzheimer’s, instead focusing on a core contributor at the genetic level.

“The approach we took is to ignore all that and think about it from a genetic point of view,” he said. We know that APOE2 is protective: those who inherit a copy of APOE4 along with APOE2 have normal risk of developing Alzheimer’s. So why not deliver that particular gene lottery into the brain and artificially decrease risk?

The idea is a very long shot. Gene therapy is usually only tested on diseases in which there’s one obvious genetic culprit, for the body and brain. Although APOE is no doubt important for Alzheimer’s, it’s far from the only contributor.

But Crystal’s previous data in animals suggests that the crazy idea could work. In 2016, his team stuck a needle into the brains of mouse models of Alzheimer’s with high amyloid-beta levels, and injected a virus that carried the APOE4 variant. Multiple tests showed that treated mice accumulated fewer amyloid protein clumps, suggesting that the protective variant of the gene helped clear out or inhibit the toxic one.

To be clear, the team never tested whether APOE2 was enough to reduce Alzheimer’s symptoms in mice, nor tried out the therapy in primates with Alzheimer’s-like dementia. They only showed that it’s possible to spread the gene widely throughout the brain with a single injection.

This is why the team is starting slow. Their first step is to determine if the APOE2 gene is actually detectable at a functional level in patients with two copies of the APOE4 gene and verifiable amyloid accumulation. In roughly 15 people, they’ll suss out if the treatment is safe—a necessary step, given that gene therapy has led to deaths before.

By drawing a patient’s spinal fluid, the team can figure out the maximum amount his or her brain can tolerate of the foreign virus and the newly-acquired APOE2. With luck, they may even see some signs that the treatment is working, in terms of amyloid accumulation. Because neurological symptoms happen years after the molecular machinery behind Alzheimer’s activates, it’s unlikely that the treatment will cure the patient’s memory symptoms. Rather, the therapy is positioned as a preventative measure for those with genetic risk for Alzheimer’s still in their middle age, before the onset of symptoms.

The study is open-label, in that everyone involved knows what they’re getting, and the placebo effect is nearly unavoidable. But the pioneering trial may be the first step towards an entirely new approach to tackling one of the world’s most devastating diseases. Millions of lives—including those of the patients and their loved ones—are on the line.

Even more promising, if the therapy works, it may galvanize gene therapy for other neurodegenerative diseases for which there are well-defined genetic risks (Parkinson’s is a hot target).

“We don’t know yet what will happen,” said Nick McKeehan, an assistant director at the Alzheimer’s Drug Discovery Foundation, which is helping fund the trial. “But it’s a stepping stone. Maybe we will need to treat people earlier. It’s opening the door for this type of therapy.”