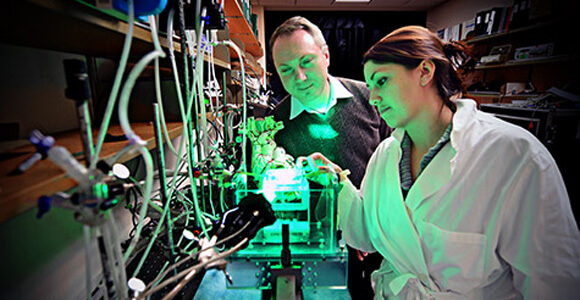 The buzz about 3D printing can at times give the impression that the technology is a panacea that makes all manufacturing cheaper. The truth is 3D printing has one very specific use case: It makes prototypes and custom, one-of-a-kind items cheaper and faster to make.

Medicine would seem like a prime beneficiary of this technology, potentially using 3D printing to provide patients with custom-made implants and stents. Yet, to date, medical researchers have focused on the most ambitious goals for the technology, such as replacement organs printed from a patient’s own stem cells, which need years of development before they reach average patients.

Recently, a somewhat more modest medical device — and one that could find its way relatively quickly into treatment protocols — was created using 3D printing. Researchers Igor Efimov from Washington University in St. Louis and John Rogers from University of Illinois at Urbana-Champaign used MRI and CT scans of rabbit and human hearts to 3D-print custom-fitting flexible mesh sacs that fit each heart perfectly and stayed in place as it beat.

“Each heart is a different shape, and current devices are one-size-fits-all and don’t at all conform to the geometry of a patient’s heart,” said Efimov.

Inside its fabric, the mesh can also hold sensors that monitor for signs of trouble and deliver electrical pulses, if needed. The sensors are embedded in the fabric using technology similar to what Google has said it will use in sugar-monitoring contact lenses, only more nuanced.

Doctors can position the sensors or electrodes more precisely using the wrap than by attaching them directly to the heart with sutures or adhesives, Efimov and Rogers state in a recent paper in Nature Communications. They demonstrate in the paper that sensors attached to the mesh (or multifunctional integumentary membrane) accurately measure temperature, mechanical strain and pH, and could deliver pulses of electricity.

Depending on the sensors used, the heart wrap could improve treatments for a range of disorders; it could also be used to deliver medication directly to where its needed. But the device was conceptualized specifically to treat ventricle deformities and arrhythmias. The arrhythmia atrial fibrillation affects about 4 million Americans; patients often undergo a surgery that destroys the heart’s own drummer, the atrioventricular node, and subsequently receive a pacemaker.

No human patient has been fitted with the heart mesh yet, but the researchers believe they will be able to install it in a relatively non-invasive procedure, by inserting a catheter into a vein beneath the ribs and then deploying the mesh “like an umbrella,” Efimov told Singularity Hub.

Of course, before any people are treated with the mesh, it will have to be proven safe and effective for long-term wear.

Rogers, whose portion of the work was developing and attaching the sensors, is one of the most important figures in the emerging field of biocompatible electronics. He has devised ways to make electronics bendable, so that electronic medical devices can operate safely and comfortably inside the body.

The idea of custom-fitted wearable computing for the internal organs could find applications beyond atrial fibrillation and even beyond the heart, the researchers said.

“Because this is implantable, it will allow physicians to monitor vital functions in different organs and intervene when necessary to provide therapy. In the case of heart rhythm disorders, it could be used to stimulate cardiac muscle or the brain, or in renal disorders, it would monitor ionic concentrations of calcium, potassium and sodium,” Rogers said in a statement.

But don’t be surprised if the technology finds some more superficial applications, as well.

“I’m really surprised that we don’t yet have businesses that would digitize your body and make custom clothes,” said Efimov.