Manufacturing is dirty, dull, and outmoded. It’s a slow-moving industry stuck in the past as new technologies out of Silicon Valley threaten to upend it. Stereotypes are fun, and misleading.

Let’s not forget manufacturing is the industry that made the modern age.

Manufacturing is high tech and low tech. Greasy, hands-on problem solving in some places and spotless clean rooms in others. Aging assembly lines and lines of choreographed robot arms. At Singularity University’s Exponential Manufacturing Summit, the industry was in focus, with a good look at what’s coming next. Manufacturing is changing, but that isn’t new.

What’s notable is the quickening pace of change.

The big themes this year: How to sift, identify, and make use of the latest technologies and tools to get nimble, break old habits, and stay ahead of the next big wave. Of course, it’s impossible to fit so much information into so little space, and what matters most depends on your lens.

Disclaimers aside, here’s what caught our eye at this year’s summit. 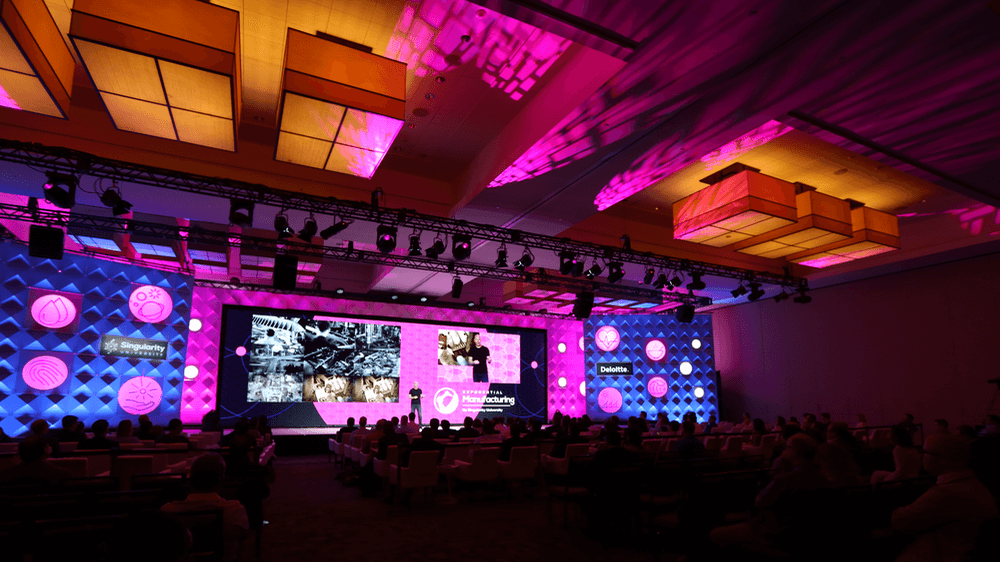 Jane Zavalishina, CEO at Yandex Data Factory, said the biggest AI misconception is that it’s this futuristic thing. It’s not. And it’s not just for tech giants either. The same machine learning software helping you find, watch, and buy what you want online can now be put to use in other contexts, such as analyzing raw factory data to dial in industrial processes and save costs.

Zavalishina said machine learning software like this is available now and, sometimes, even free.

“These systems have been really useful for quite a while. And what’s changed is, in 2017, the technology is now so available that you don’t have to have super-skilled people using it,” said Neil Jacobstein, faculty chair of Artificial Intelligence and Robotics at Singularity University.

“You can [apply] the technology…to a wide variety of problems in industry from design to quality control to manufacturing to customer services…You’re seeing really good results now.”

Further Exponential Manufacturing Summit reading:
Where AI Is Today, and Where It’s Going in the Future

2. Robots are now smart enough to avoid killing you.

Robots are old hat in manufacturing, but they’ve always needed tightly controlled environments to work and PhDs to program. Robotics legend Rodney Brooks demoed Rethink Robotics’ Sawyer robot live onstage to show it can be programmed by anyone.

And thanks to cheap 3D modeling hardware and better software, robots are also getting smart, lightweight, and aware enough to work next to humans without accidentally hurting them. The next step isn’t the end of human workers, it’s a collaboration that combines the best of robots and the best of humans.

Further reading:
Veo Gives Robots ‘Eyes and a Brain’ So They Can Safely Work With People
4 Keys to Making the Robots of Our Imagination a Reality

3. 3D printing is gearing up to take on mass manufacturing.

The dream of 3D printing has always been to make anything, anywhere, anytime. But the challenges have been cost, quality, and speed. With emerging solutions from Carbon and others, 3D printing finally appears poised to take on mass manufacturing. In areas where 3D printed final parts are possible, assembly lines will be dematerialized. That is, we’ll go directly from design to part, without the need to retool and rebuild infrastructure for every new product.

“A 3D printer…is a programmable factory,” said futurist, hacker, and inventor Pablos Holman. “It doesn’t care what it makes. It doesn’t care if it ever makes the same thing twice. And that is the powerful thing about these machines. That lights up our imagination.”

4. Augmented reality will transform how we design and build.

Lots of people have heard of or tried virtual reality by now. There are commercial devices on the market and plenty of speculation about when it’ll achieve mainstream adoption.

Right behind virtual reality is augmented reality. Whereas virtual reality is completely immersive, augmented reality lays the digital world right on top of the real world. It’s a more complicated engineering problem, but it also has more applications. In a world of advanced AR, we’ll use a small wearable device to interface with computers like Tony Stark in Iron Man.

In manufacturing, this means designers ditching 2D modeling programs to do their work more quickly and intuitively in 3D spaces hovering over their desk. It means workers on the factory floor getting real-time big data insights about machines and processes laid out in front of their eyes or hands-free, step-by-step instructions guiding them to repair and build things.

“So, the whole world will be our display…and we’ll be used to being in augmented reality all the time,” said Ray Kurzweil, Singularity University co-founder and chancellor. “I think that’s the future of interacting with technology. It’ll be an increasingly seamless part of our world.”

Further Exponential Manufacturing Summit reading:
The Next Great Computer Interface Is Emerging—But It Doesn’t Have a Name Yet

A bit further down the road, biomanufacturing will be a big deal, according to Raymond McCauley, chair of Digital Biology and Singularity University.

We’re learning to reprogram simple organisms into sensors and miniature factories for making fibers, fuel, and food, he said. “Anything that is not just metal being bent. Most of the materials and how they’re produced and recycled will happen because of biological means.”

And we’ve seen progress. McCauley noted gene-tweaked algae making biofuels and modified bacteria spinning spider silk. But, he said, while the tools to make biomanufacturing a reality are getting cheaper and more powerful every year, scaling up is still a big challenge.

6. To survive change, innovate on the edge more…a lot more.

Technology is clearly moving fast. So how do you keep the pace?

Old companies on the S&P 500 once had 50- or 60-year lifespans. These days that number is more like 20. Small software startups can disrupt giants of industry. Innovation is no longer that thing you do on the side, it’s a critical and increasingly central survival skill.

Geoff Tuff, leader of digital transformation at Monitor Deloitte, and his team came up with the “golden ratio for innovation” five years ago. Their advice? Spend 70% of your innovation resources on the core, 20% on areas adjacent to the core, and 10% on the transformational space. This wasn’t supposed to be a rule set in stone, but rather a way to start the conversation: How much and where do we innovate? The short answer today: More and outside your comfort zone.

Further Exponential Manufacturing Summit reading:
How to Stay Innovative Amid the Fastest Pace of Change in History

7. The pace is accelerating. Can we keep up?

The tone of the conference was hopeful and excited, but the implications, some of them worrying, were also discussed. The pace of technology-fueled job creation and destruction was foremost of these. Advanced AI and robotics promise widespread automation. Historically, automation has done away with old less satisfactory jobs in favor of, on the whole, better ones.

“People say, great, what new jobs? I say, I don’t know, we haven’t invented them yet,” Kurzweil said. “It’s not a great political answer. It remains the answer today. It happens to be true.”

But transitioning from one skill set to another isn’t simple and can be too easily glossed over. In the past, such transitions have been very bumpy. And that’s the problem keeping Singularity University co-founder and chairman, Peter Diamandis, up at night. He worries the time it takes to make the transition won’t match the rate of change. It’ll all happen too fast.

“In 1810, the United States had 84% farmers. Today it’s 2%. A huge change in our job markets. But that was over a long period of time,” Diamandis said. What if we lose “huge swathes” of jobs over a 20-year period instead? We’ll see social and political unrest on a grand scale.

Diamandis said universal basic income may be a way to help ease the transition. And while we can’t shrink from the coming challenges, neither can we let them blind us to the hugely positive and beneficial change being wrought alongside.

What We’re Learning From a Big Universal Basic Income Experiment